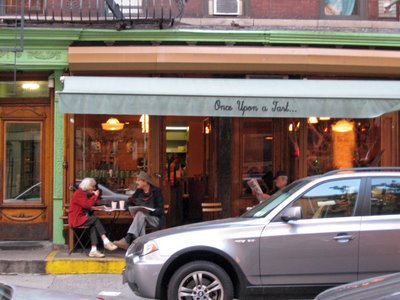 Yup, that’s the name of the bakery/cafe that is located in 135 Sullivan Street (near Houston St) in SoHo. I’ve been to this adorable bakery a few times for the past couple of years. Mostly pastries, they did have good madelines and biscottis. Well, after sifting through their own cookbook again in Strands Books, made me want to come back to this place. (I know the photo isn’t balanced and all, but I was in a hurry. Sorry.).

The foods I’ve tried were their walnut apricot scone ($2.25), pumpkin cranberry biscotti ($1), a spinach mushroom tart ($5.50) and an iced tea ($2.25).
In case you’re wondering, no I did not eat all of this in one sitting. This is my breakfast (I ate in there: scone, biscotti and iced tea were my breakfast) and lunch (in Queens, with a friend: the tart).

When I ordered the scone, I just read the sign that had all the available offerings of scone, so when I read “Walnut apricot scone,” I didn’t expect to see that. I thought it was a huge cookie when they had it on display. I had a different image in mind. Oh well. The scone really looks like a huge thumbprint cookie. What I had in mind was a scone with chunks of walnuts and dried apricots. This scone is actually made of walnut flour and apricot jam.

That’s a mild surprise to me. Well, the good part was that the scone was still warm when I tried to break the scone in half to get a photo of the interior. It tasted pretty good. The walnut flour gave it a earthy, nutty, and a slight bitter flavor, since it is a walnut. The apricot jam gives it a nice, sweet and tart contrast to the nutty flavor of the scone itself. It very good but it’s not traditional. 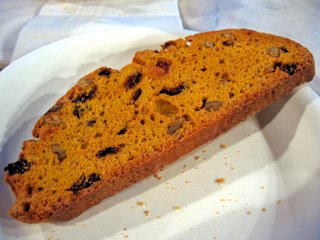 The pumpkin cranberry biscotti was a flavor I had in mind since the coming of fall. Usually, I like to eat to seasonal or at least seasonal flavors. So, this particular flavor was calling me. Anyways, this biscotti is really chunky, as you can see, filled with lots of dried cranberries, walnuts, and pumpkin seeds. The biscotti had a rich pumpkin flavor from the spices of clove and nutmeg. The sharp tartness of the cranberries heightens the flavor of the pumpkin and the walnut and pumpkin seeds gives the cookie an earthy, crunchy flavor and texture. The biscotti was really crunchy, a good thing since biscotti means twice baked in Italian. I was really inspired to bake my cherry, white chocolate biscotti after eating this! Eh, unfortunately school doesn’t really let me schedule that in. Probably, when I start going on my baking craze during the holidays, I’ll bake again.

The iced tea was decent. I kind of regret getting it since I really wanted to dunk my biscotti in coffee or espresso. The tea was fine though, it had a nuance of lemon zest flavor, as if it had lemon slices soaked in a few hours and strained off, so it had that bitterness of the lemon pith (the white stuff under the yellow skin of a lemon). 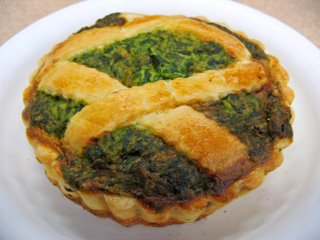 The spinach mushroom tart. First of all when I met up with my friend, Seungmi, for lunch she asked me, “What is it?”
I replied to her, “It’s a spinach mushroom tart.”
She said, “Spinach?!”
I said, “Yeah, what about it?”
Then it hit me (and she also told me), the spinach E.coli problem. But I remembered, after reading and taking so many years of biology, E.coli wouldn’t be a problem if you washed and cooked your food properly. So, with this fact, it allieviated her issue with eating a piece of this tart.

Oh, I should mention that this tart was actually refrigerated. So, that a huge drawback about this tart. I refused to microwave this tart, too because it would make this tart even softer than what it is. So, when I ate this tart it was thawed out a few hours from the morning. Probably the flavors of the tart that would be there when it’s warm wouldn’t shine through since I chose not to microwave it. 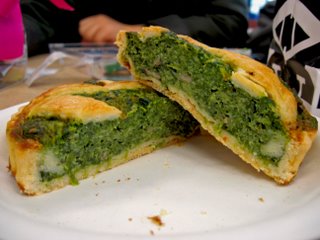 The tart looked very green and I didn’t see much of mushrooms when I cut it in there until it into a tiny bite. It was soft, obviously since I’ve explained earlier. The crust tasted bland; texturally, it’s a little flaky. The spinach filling had a touch of eggy-creaminess, barely any mushrooms and it was still bland. It didn’t taste so great, which is a bad thing for their namesake. It was decent at most.

I would try their sweet dessert tarts, I just don’t know about their savory, if it’s still stored in the fridge. Well, at least I know I’ll have a dependent bakery for homestyle desserts…