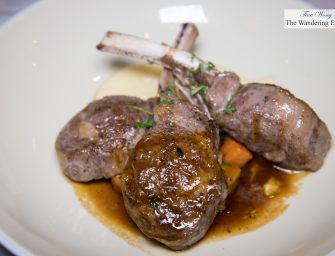 Interior Oscar Naimo’s Macarthur – Bacardi Facundo Eximo Neo Rum, Cointreau, fresh lime, egg white Baby beet and kale salad It’s been a while since eaten from a NYC Restaurant Week menu as I tend to see the menus for this ‘week’ are mundane. When I was invited to a preview of Perrine at The Pierre Hotel for their Restaurant Week dinner menu, I opted to attend since the food from Chef Ashfer Biju and his team tends to be classic French but it’s delicious. The Perrine is a sophisticated room: sleek and shiny as an Aston-Martin showroom, with fine black-and-white..