Excellent Peking Duck at Jin Yaa Tang at The Opposite House (Beijing, China) 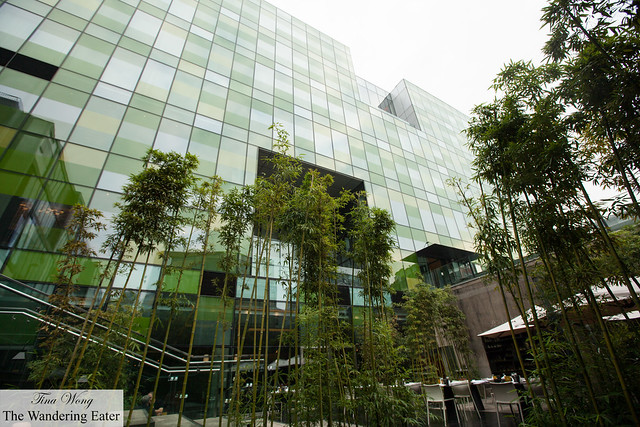 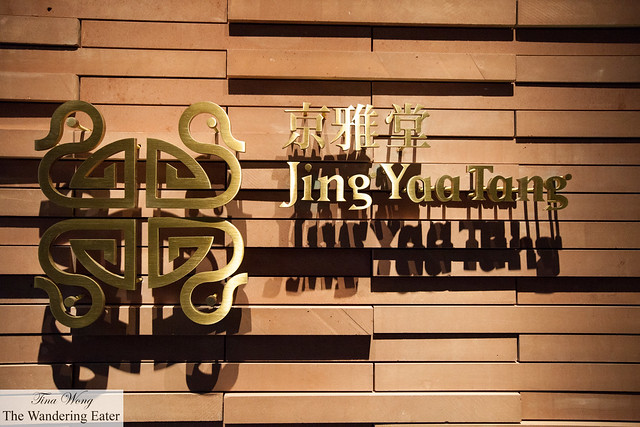 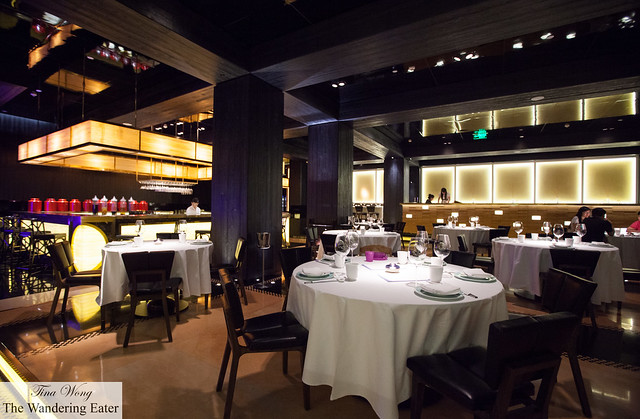 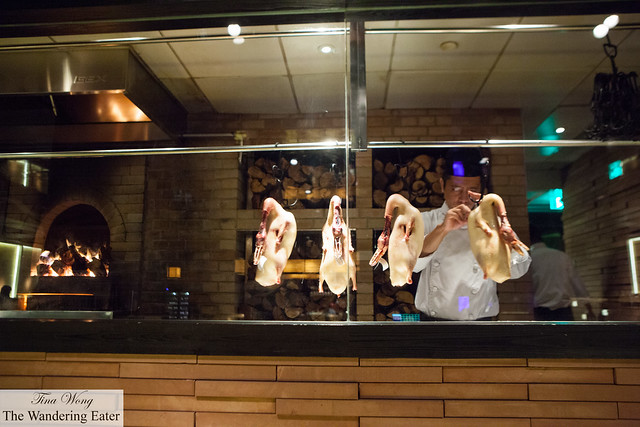 Jin Yaa Tang is a pan-regional Chinese cuisine restaurant anchored around Beijing’s most international recognized contribution to global cuisine – Peking duck. This restaurant is located in the Opposite House and the hotel is a pretty popular boutique hotel in Beijing, catering to a clientele generally much an even mix of well-off short-term-stay business travelers and well-off short-term-stay leisure travelers. So, instead of referring their guests elsewhere, Opposite House can now refer them downstairs to their very own venue right on the site.

The Beijing duck is on the first page on the menu, but it unfolds on into a pretty expansive and exhaustive document, touching on several regional Chinese cuisines — Szechuan to Cantonese — broken down into poultry, pork, and beef sections, veggie and tofu dishes, noodles and rices sections, and more. There’s all different preparation methods lik stir-fries, clay pots, the works. Even traditional Beijing snacks, street foods, and traditional dessert items are represented. It’s basically Chinese Food 101 for visitors to Beijing, but there’s also a fair emphasis on being mindful to Beijing’s own heritage on the dining table. This restaurant strives to satisfy both Chinese traditionalist diners and Westerners who are fresh off the plane and just want a pleasant but cursory experience on what Chinese food is like in China. 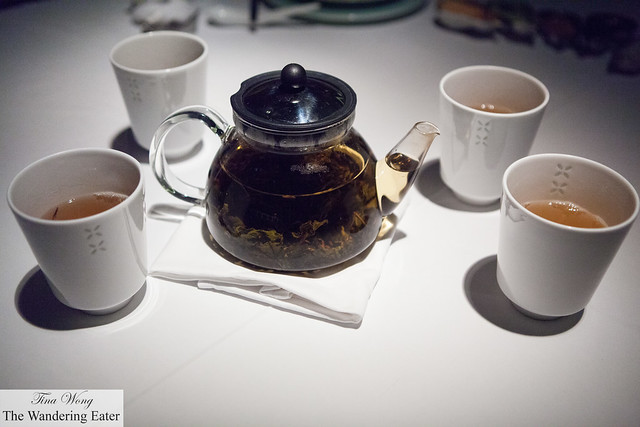 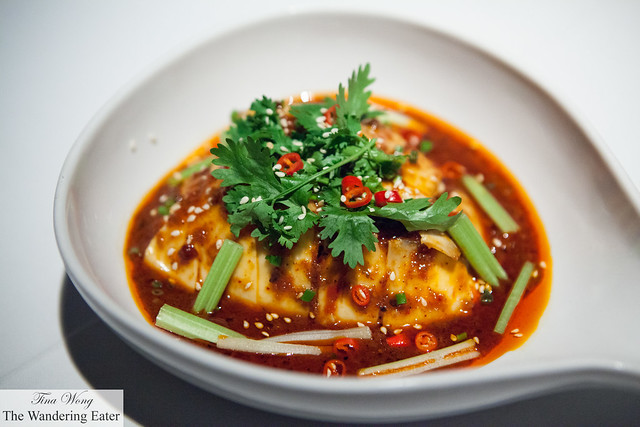 We started with our pot of delicious Iron Goddess oolong tea (鐵觀音; 38 RMB) and started with our appetizer of Szechuan poached chicken with crushed peanuts and sesame (68 RMB) came out first. The chicken is served chilled but being surrounded by the shallow bright red pool of chili sauce, it slowly smolders your mouth and it tastes very good. 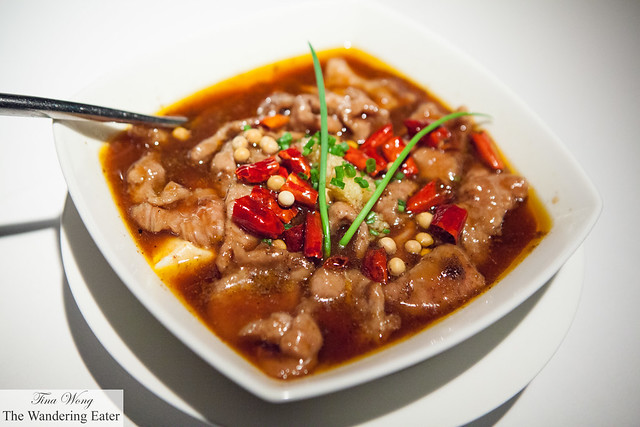 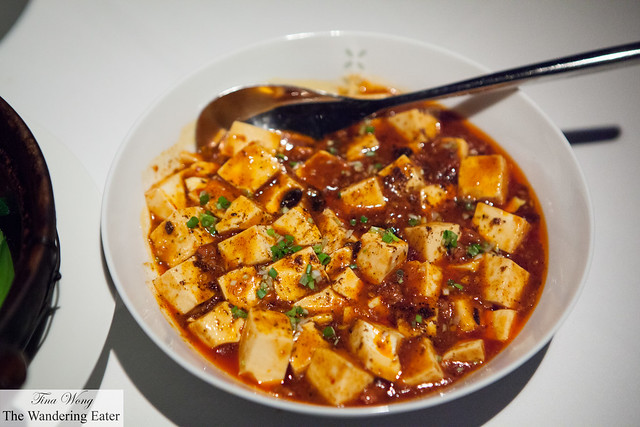 We moved on to two more Szechuan dishes of Szechuan beef and tofu stew (88 RMB) and mapo tofu (78 RMB). Maybe we over ordered the Szechuan dishes but they were solidly executed. The tofu stew was silky and soft with a mild spiciness. The mapo tofu was much more complex than just straight spicy with the toasted cumin seeds. 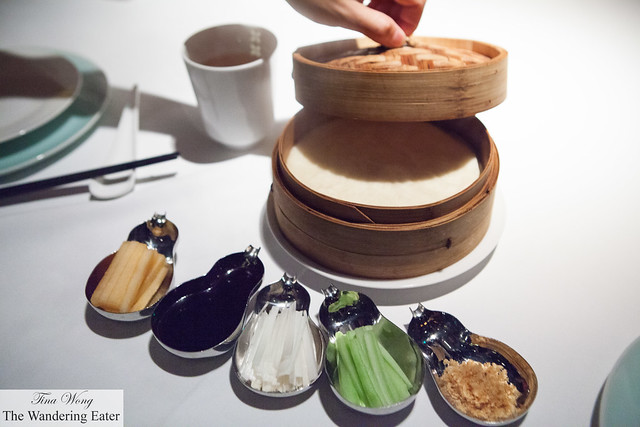 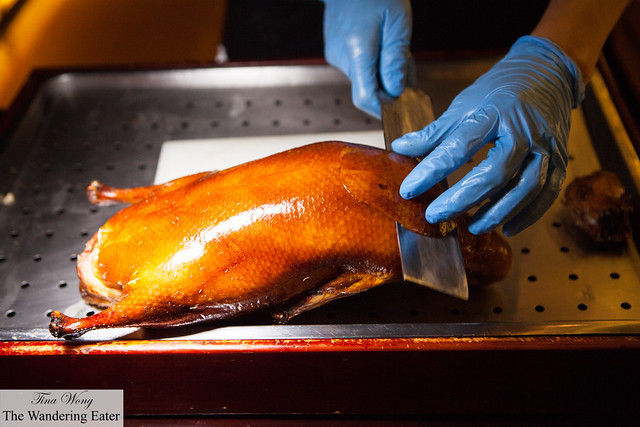 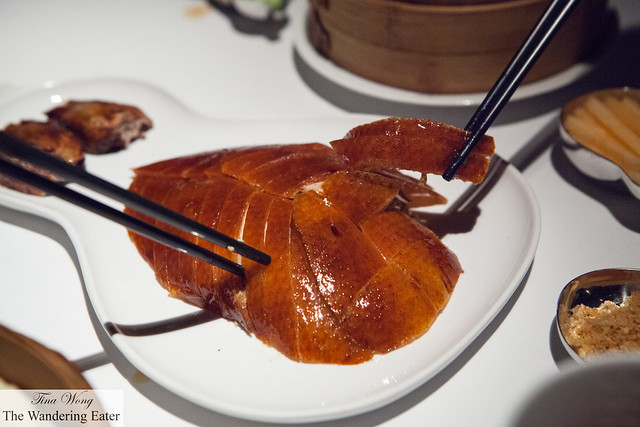 We finally reached to the best part of the meal Peking duck (whole duck 238 RMB). Our waitress brought over our condiments of sweet date sauce, thin sticks of fresh cantaloupe (it sounds odd but it bridges and enhances the sweetness of the duck), celery, scallion stalks, and in-house made paper thin flour pancakes. The expertly sliced duck was exceptional. The crispy skin comes with the requisite overnight wind-drying process after a bath in aged vinegar, molasses and spices. Roasting over an open flame with jujube date wood lends a subtle fruity smokiness. The meat was succulent and moist. 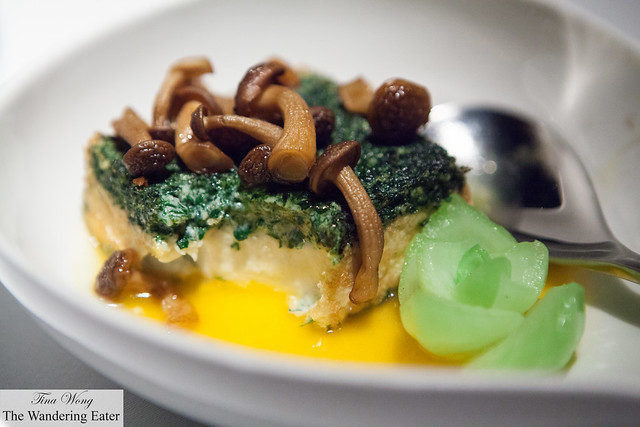 We almost forgot we ordered other dishes. Their homemade tofu spinach bean curd in pumpkin sauce (48 RMB) was the most intriguing tofu dish I ever ate. The brick of fresh tofu is pressed down that it’s firm to a texture of fluffy fish (I mean this in a good way) with spinach. The earthy sweet pumpkin sauce combined with that pressed tofu, it almost tasted like fresh steamed fish in a sweet-earthy sauce. It’s mind bending and very tasty. 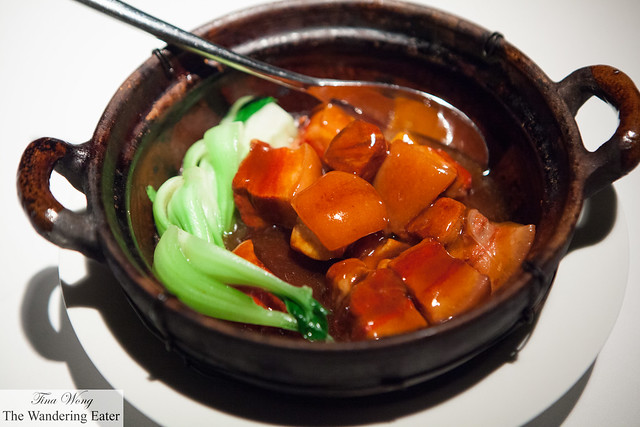 The other protein that stole our attention was superior braised pork in brown sauce (98 RMB). The stewed pork belly was incredibly soft and pliantly chewy like a glazed pork marshmallow. It was delicious. 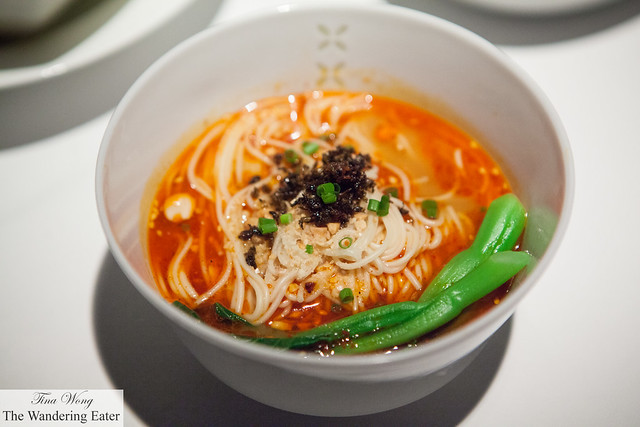 For a starch to end the meal, we had their Szechuan dan dan noodles with spicy minced pork (38 RMB). The misua noodles were slurpable, slightly salted and not oily. What disappointed me was how soupy this dish was, as I was expecting a thicker sauce. Nevertheless, it was a good bowl of noodles that was spicy enough to make your mouth tingle and the textures of the pasta was good.

Overall, this meal does cover all the basics of Chinese cuisine but done in a sophisticated fashion and cooked with very fresh ingredients. Service is friendly and professional. We intentionally stuck with Szechuan dishes because we are closely located to the Northern provinces of China. The Peking duck is the star of the meal and if you are searching for one of the best Peking ducks in Beijing, this is it.

To view more photos of these visit, please CLICK HERE or view the gallery below: