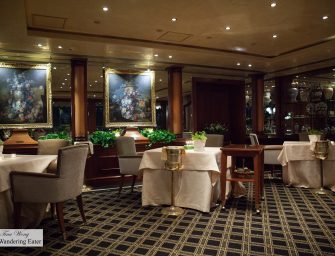 Chef Heinz Beck has a mini-empire of restaurants, stretching from Italy (Rome and Tuscany) to Portugal, Dubai (which just opened), London (Ora by Heinz Beck at Brown’s Hotel) and (from late 2014) Tokyo. His flagship, La Pergola, opened in 1994 and is situated on the top floor of the Cavalieri hotel, which is perched on one of the hills of Rome and overlooks St Peter’s Basilica. The dining room tables are arrayed around the picture windows overlooking the city. The wine cellar here is vast: an array of rooms containing 65,000 bottles of wine, with 3,500 different labels offered on..

La Chine at the Waldorf Astoria is a grand, luxurious haute Chinese restaurant. Renovated in colors of black, gleaming gold and silver, fuzzy banquettes and a black marble bar. The layout is like an old-school power room surrounded by orchids and dim lighting. I’ve been in the search for solidly good high-end Chinese food in New York City (I’m speaking of the ones I’ve eaten Shanghai, Beijing and Hong Kong) and based on this dim sum afternoon tea experience, I think this is a good bet. The service was professional and friendly. The plush atmosphere feels comfortable. The food generally..
ChinaHotelsShanghaitravel

Since we were staying at Waldorf Astoria Shanghai, we might as well their legendary Red Velvet afternoon tea at the elegant, plush lounge on the hotel’s main floor, Peacock Alley (338 RMB per person/ 588 RMB for two persons). (more…) 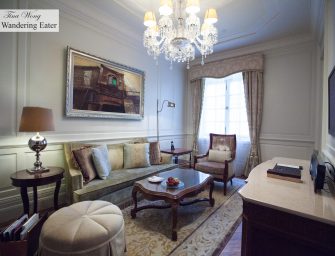 The Waldorf Astoria Shanghai is an elegant historic (the original portion opened in 1911) hotel has restored the heritage Shanghai gentleman’s club to its former glory, located in the heart of The Bund. This is the most glamorous hotel in town. Lovingly-restored in Neo-Classic style, the hotel decor is opulent but understated with trembling crystal chandeliers, lots of gleaming marble, and a working antique cage lift. (more…)