Paul A Young Fine Chocolates (London, UK) – One of the Best Chocolatiers in London

Exterior and Interior of Paul A Young Fine Chocolates Soho location; Pecan and Salted Caramel Cocoa Pods; Paul A Young himself During my stay in London, I visited Paul A Young Fine Chocolates in Soho. Paul Young is a London based chocolatier who worked in the restaurant ranks under Marco Pierre White (White is a celebrity chef in London, godfather of contemporary international cuisine, and earned many Michelin stars) at Quo Vadis and Criterion as head pastry chef prior to him opening his chocolate shops. Paul opened his first shop in 2006 on Camden Passage in Islington with his business.. 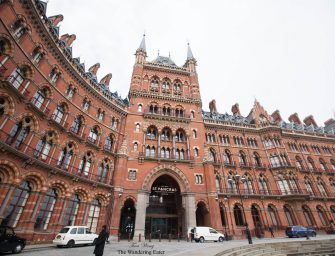 Inside Hansome Lounge, the lobby of St Pancras Renaissance Hotel During my trip to London, I had the opportunity to stay at the historical, luxurious St. Pancras Renaissance Hotel in King’s Cross. King’s Cross in London is currently an up-and-coming neighborhood where both locals and travelers would meet since the railroad stations are here. This hotel was built in the 1860s, when the thriving Midland Railway, which connected the industrial heartlands of the East Midlands and Yorkshire with London, chose to build its own railway and station. William Barlow owned the property and appointed architect, George Gilbert Scott to build..

View of Tower Bridge from London Bridge*; Table setting & menus; Partial interior of dining room; W checking his phone while getting his Riesling; My plate of amuse bouches The Ledbury was one of my favorite meals in London. Not just because this is in a beautiful neighborhood of Notting Hill, a two-starred Michelin restaurant, and World’s 50 Best Restaurants (#13 in 2013), under the helm of Brett Graham, being surrounded by the well-to-do, ladies who lunch, and a large round table of wine pros having a serious wine lunch, but because I finally had the pleasure to meet and..

OXO Tower Brasserie is found on the rooftop of an award-winning, riverside landmark building named the OXO Tower, found on the South Bank of London. This tower houses some of the most innovative and internationally renowned contemporary designers, and exhibition venues gallery@oxo and Bargehouse. The area is sort of what reminds me of Williamsburg, Brooklyn back in the late 1990s, where it’s an industrial area but revamped to an artistic hub. Shoppers and diners who go up to OXO Tower Brasserie are definitely the well-to-do locals, as I recalled smelling a strong scent of a woman’s Dior fragrance when a..

Big Ben & The Houses of Parliament In case you don’t follow my Twitter or Instagram, I went to London about two weeks ago. (I’m suggesting you should follow either to keep abreast with my activities since it’s quicker to do a short update than writing a full blown post here and actually get to read this much later than what happened.) Many fellow Londoners who I’ve met when traveling and some — eating with — through that fine city asks me, “Why visit London?” My answer is, there’s a food revolution happening there for the past five to ten..