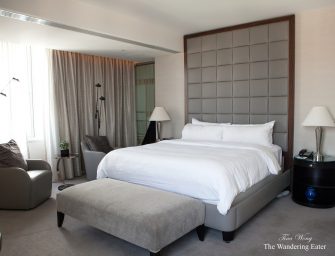 At the lobby of Loews Philadelphia Hotel Loews Philadelphia Hotel is a national historical landmark (earned its status in 1979), as it was the first International style skyscraper built in the United States. This building was formerly the Philadelphia Saving Fund Society Building, or PSFS Building, the nation’s first savings bank. The bank commissioned the construction of a 36-story, 491-foot skyscraper that would provide for the banking and office activities of the Society, designed by architects William Lescaze and George Howe. The bank eventually failed and was bought by developers to turn into a Loews Hotel. Conversion into a hotel..