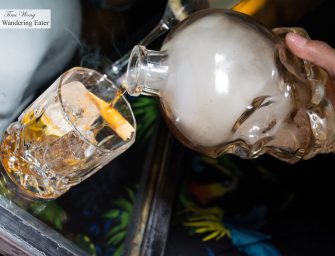 When it opened, Jules Basement was intended to be a speakeasy-style bar, a secret spot known only among friends and friends of friends who spread the news that there was an literal underground bar behind a refrigerator door in a taco restaurant at Julio Verne 93. Jules Basement has become a magnet for bar hoppers who love craft cocktails and hangouts where decor is as important as drinks. With respect to the former, expect a black-and-white color scheme, lots of texture on the ceiling and bar, and Damien Hirst-esque skulls (minus the shimmering diamonds). Since we were there on a..