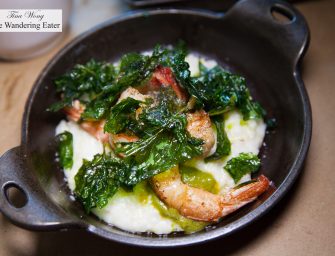 Holeman & Finch is literally across the way from the fine dining establishment Restaurant Eugene but both restaurants have different personalities but under the same ownership. H&F is an upscale casual restaurant that tries to be gutsy (in a somewhat literal way) with their food. The menu (lunch, at least) is more offal leaning and the restaurant make and cure their own sausages and hams and generally, all of what we had tastes good. The cocktail menu is creative and the bartender and his team make their infused spirits. Service was as professional and attentive as Eugene but it feels..