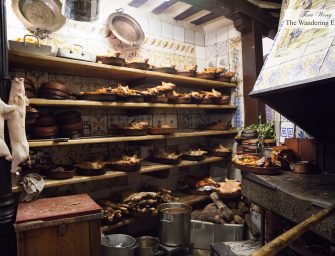 Sobrino de Botín is one of the oldest restaurants in Madrid operating since 1725. First opened as an inn, the landmark eatery was founded by French cook Jean Botín and his wife. It is the world’s oldest restaurant according to the Guinness Book of Records. Today, Botín is famed for its rustic Castilian cuisine, including succulent roast meats fired in an wood-fired oven made of cast iron that’s close to 300 years old. Botín has four floors and the air of a traditional Spanish tavern. There are three dining rooms: the bodega (“cellar”), the Castilla room, and the Felipe IV..