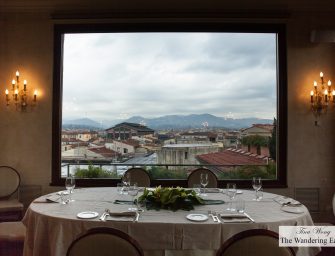 Lunch with a Spectacular View of Florence at B-Roof at Grand Hotel Baglioni Firenze (Florence, Italy)

When I was researching my trip to Florence several moths ago, I have come to understand that food in Florence is fairly traditional. Tuscan food is based on the Italian idea of cucina povera or “poor cooking.” A concept that started very literally, it’s about simple meals that are inexpensive and could easily be made in large amounts. Today it remains largely the same – but by choice instead of economy. Tuscan cooking doesn’t use complicated seasonings or elaborate creations because they’re not needed. Instead it’s made using fresh, high-quality ingredients that bring out the natural flavors in each dish,..