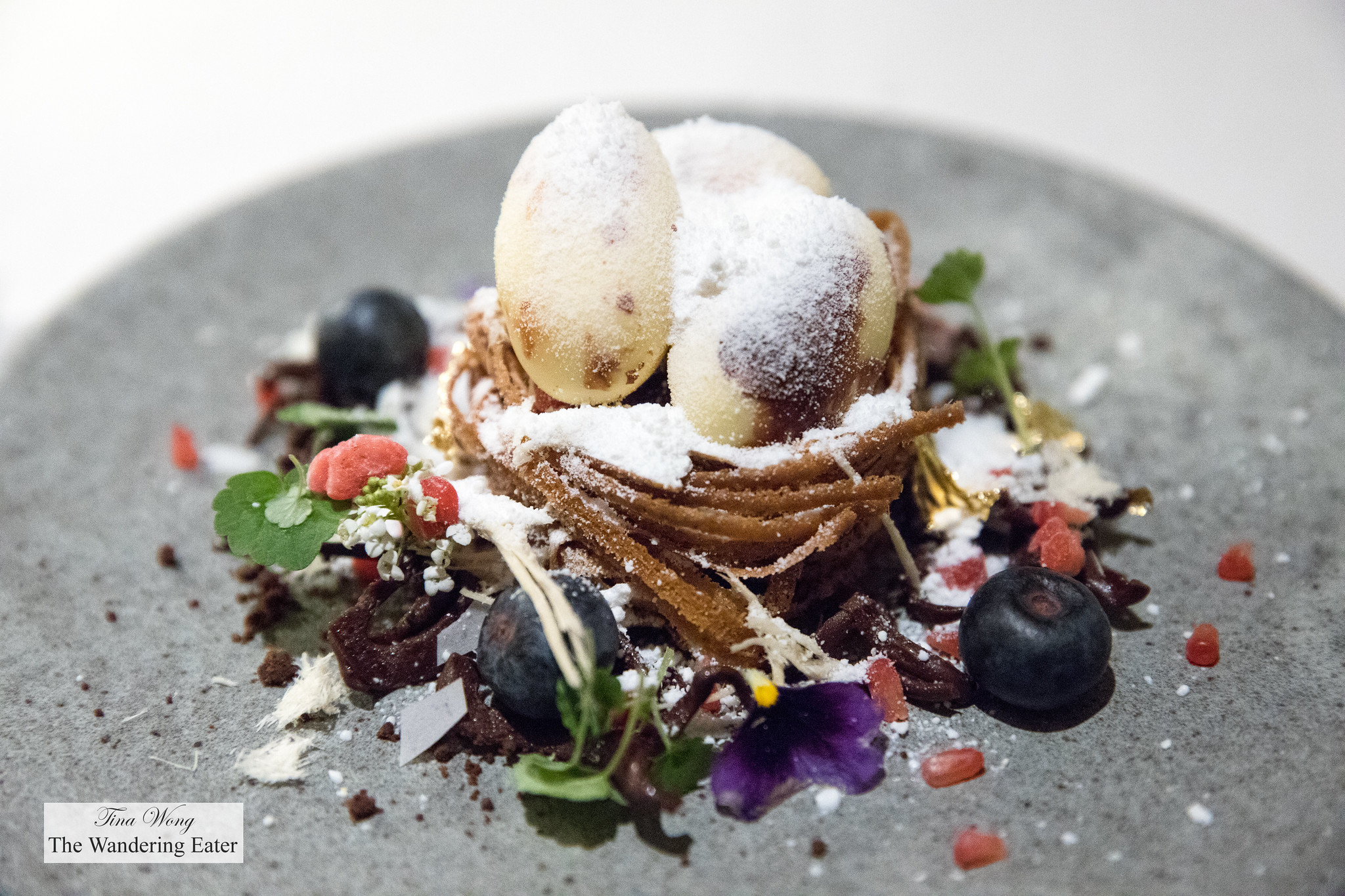 I’m happy to say after eating at Aquavit after all of these years, it is still very good for both the food and service.

This restaurant opened back in 1987 and it made the reputation of Marcus Samuelsson and moved in 2005 from a light-drenched atrium with a defining waterfall to a more prosaic space in a pink-granite tower in the East 50s, where it stands now. The restaurant had a renovation that finished this past October now has a 40-seat bar and lounge area with a menu that includes more than just snacks. The dining room has been outfitted with midnight-blue banquettes and blond hardwood floors. The wall dividing it from the kitchen is now made entirely of glass, with an automatic door for servers to glide through.

The prix-fixe dining-room menu includes a number of new dishes—from the same chef, Emma Bengtsson, who has run the kitchen since 2014—while retaining fan favorites.

I ate dinner here recently since a Japanese friend of mine who’s visiting from Tokyo. I sent her a list of places a few months in advance that I thought she should check out (a mix of Michelin and the trendy but good places to eat like Atomix) but she picked this one because she never had Scandinavian food before.

We opted for the five-course menu and swapped out the set dessert for the signature Arctic Bird’s Nest, which you see on the top of this post. Snacks of house made gravlax with chamomile jam, crisp potato cylinder filled with sweet shrimp salad and topped with briny trout roe, and a delightfully funky grapefruit tea was served.

The Montana trout with tiny, tightly wound curls of apple, topped with trout roe was refreshing. The butter poached red endive served with a qunelle of creme fraiche dusted with gooseberries was deeply satisfying. The slightly sweet-bitter endive took on an almost meaty flavor and the creme fraiche added a subtle tartness and lightness to the dish.

For the final two protein-centered courses, the Lobster and Celeriac was luxurious for the creamy hollandaise and the celeriac added the subtle crunch and the (hijiki?) seaweed added a subtly sweet, umami flavors. The Crescent Duck and Beets were deceptively minimalist in plating with the sauce poured tableside. The duck was beautifully cooked and the beets and few strewn berries added some tart-sweetness to liven up the hearty duck.

The pre-dessert of marzipan ice cream, almond biscuit with rosehip soup poured tableside was tantalizing. The rosehip soup was more syrup-like in texture and it delivered on the bright tart flavors while the ice cream was intensely almond-y. It felt like eating straight marzipan in ice cream form – and that’s a very good thing.

The Arctic Bird’s Nest dessert, a dramatic trompe-l’oeil featuring white chocolate eggs with sea-buckthorn-curd yolks topped with goat cheese “snow” at the table. My friend enjoyed this dessert very much because of the stunning beauty and the sweetness was tempered, which I agree. (Japanese sweets/desserts are rarely sweet so when she came to New York, she complained to me how American sweets are too darn sweet.) Underneath those dainty eggs, was a thick pool of tart blueberry jam to add more acid to the dessert. I can never get enough of this dessert especially for all of the crispy textures and varying temperatures of each element of the dessert. It’s really a masterpiece.