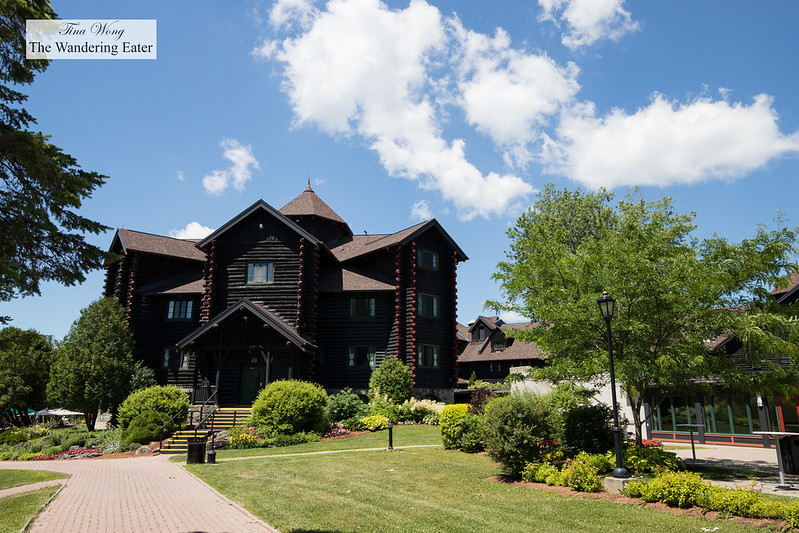 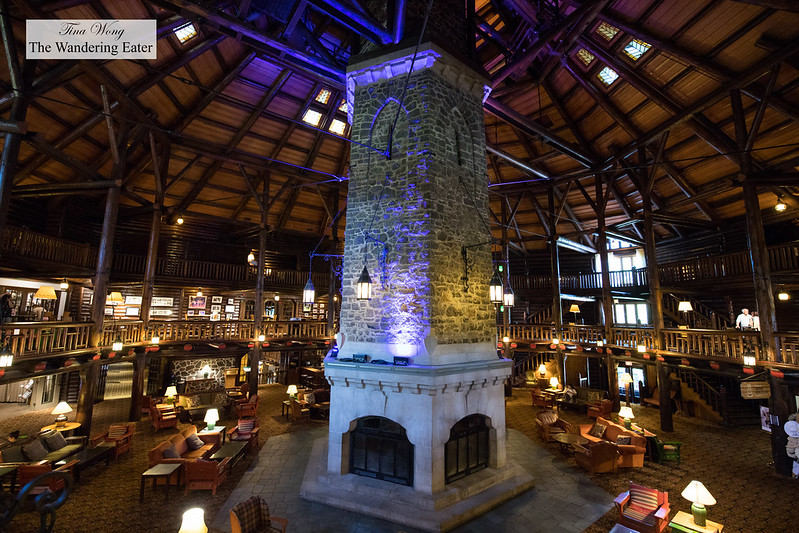 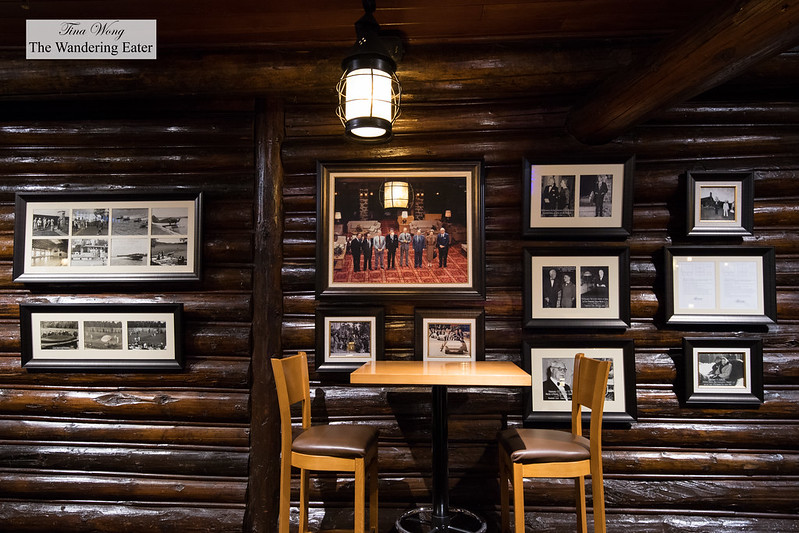 If all of you are wondering why did I go to Montebello? It’s because it’s close to Ottawa (about an hour away by car) and I wanted to be away from the city (any, not just New York). Fairmont Le Château Montebello Montebello is located on a bank of the Ottawa River with its own marina. This grand log-built hotel provides rustic luxury, local flavor, beautiful grounds, great views, and heaps of activities to do for both summer and winter. It’s an annual family destination for many well-heeled Canadians (or tourist within the northeastern part of the U.S., it seemed). When you enter the massive log cabin style resort, I couldn’t help but be in awe how large this place is (it has four wings of rooms) and the vast and magnificent working fireplace takes center stage in the lobby. 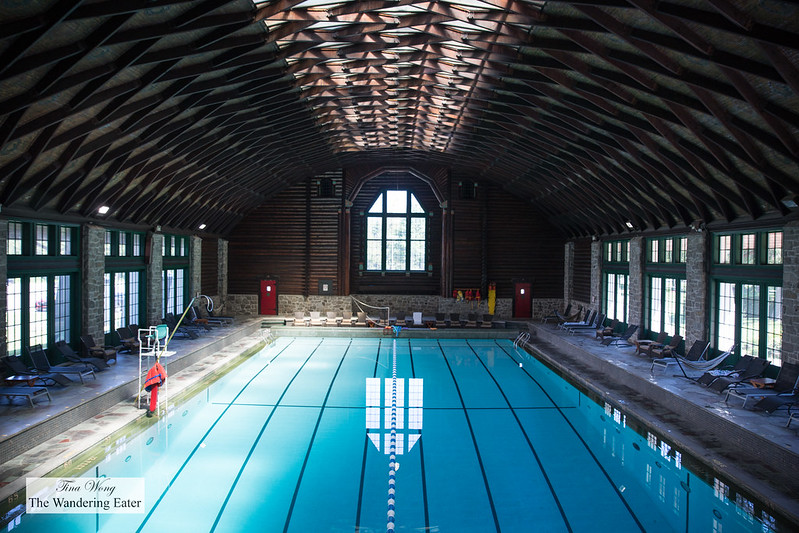 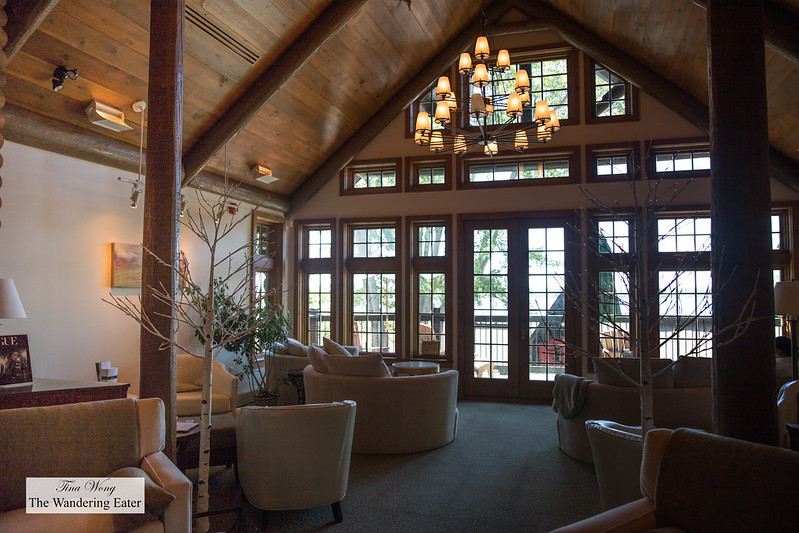 Every window seems positioned to offer a fine vista, especially in the restaurants, where the menu makes good use of locally sourced ingredients. Some 10,000 red cedar logs went into the construction of the main building, centered on a six-sided stone fireplace. Kids are especially well entertained, with pinball and other arcade style machines in the basement, indoor and outdoor pools, water sports, mountain bikes, and even a race track for remote-control cars. 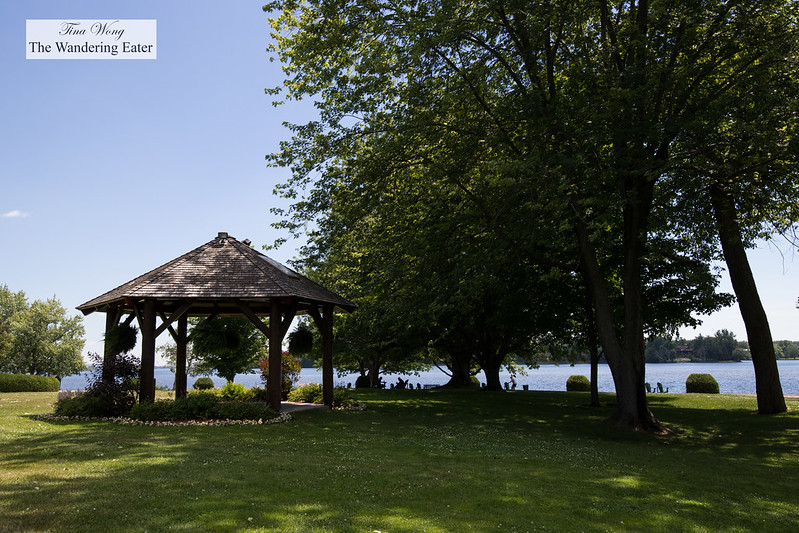 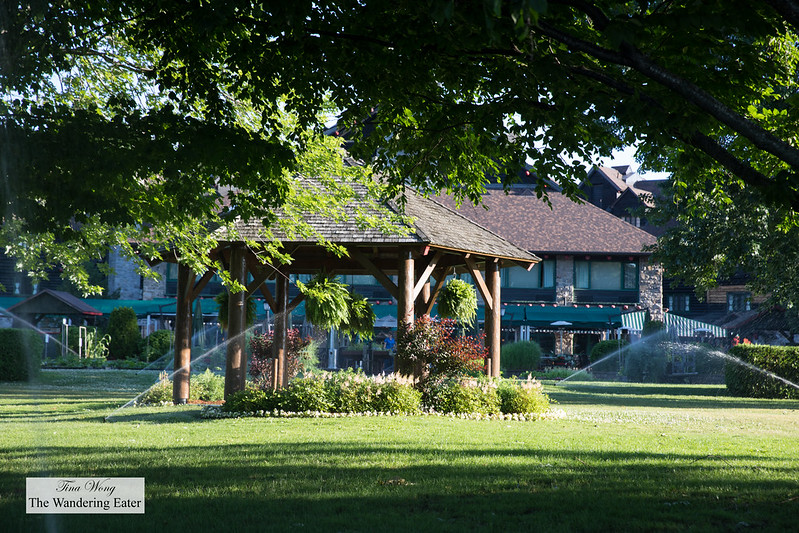 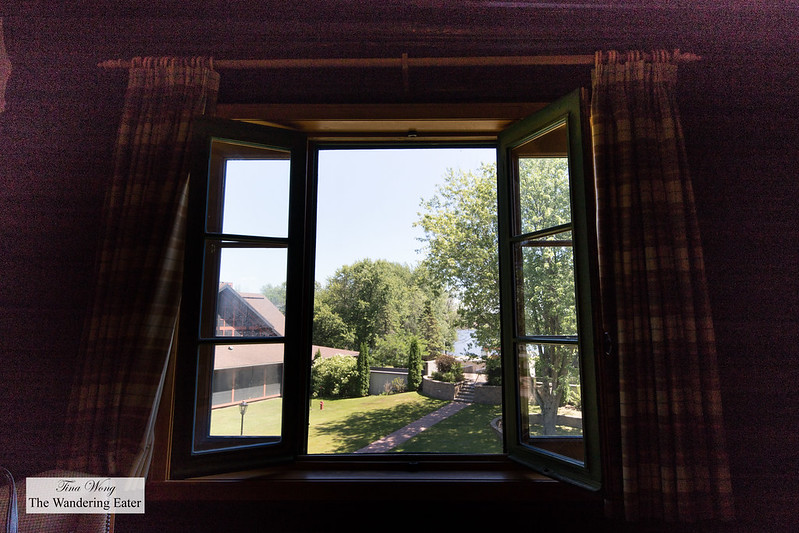 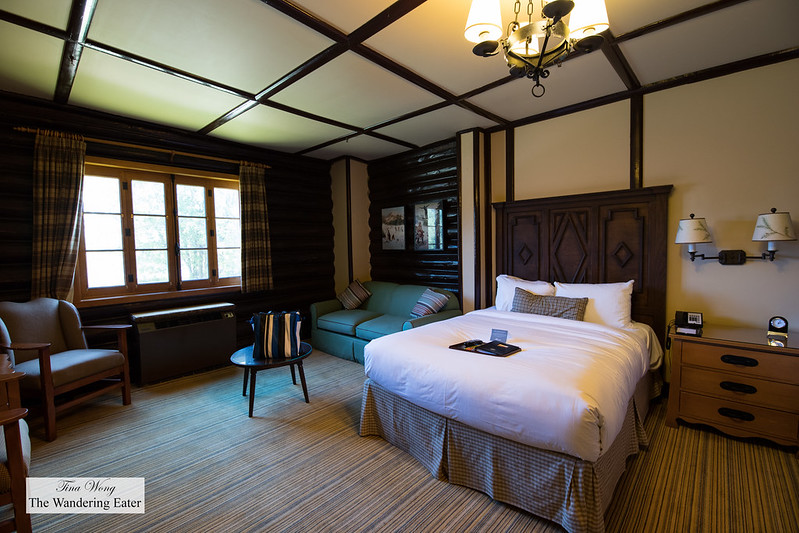 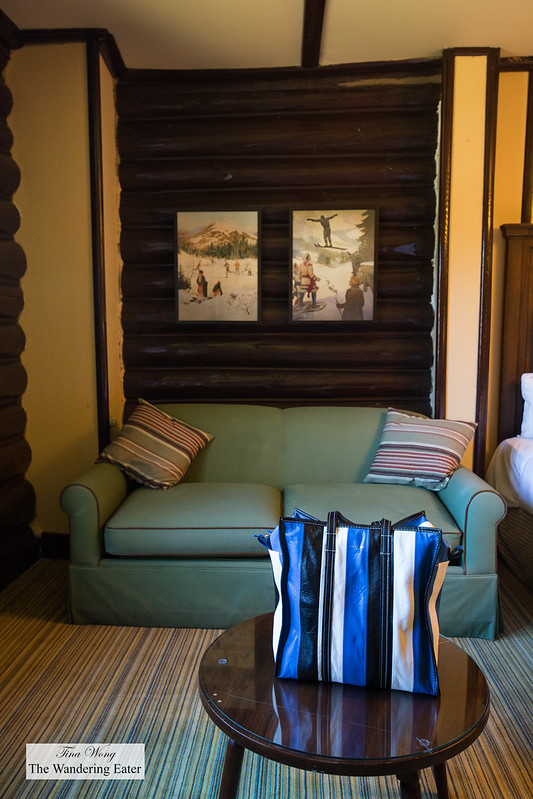 My deluxe room with a river view was spacious and charming than I’ve anticipated for any deluxe room unless it’s a suite. The beds were firm yet soft enough to feel super comfortable and the bed linens were divine to sleep in. I never slept so hard in the longest time (and I am a light sleeper by default). There is a cute seating area by the window with a view of the Ottawa River and it just gives me a moment of peace when I had my morning cup of coffee. The bathroom is on the small side but it’s clean and they have the New York City based luxury perfume brand, Le Labo toiletries stocked in there. 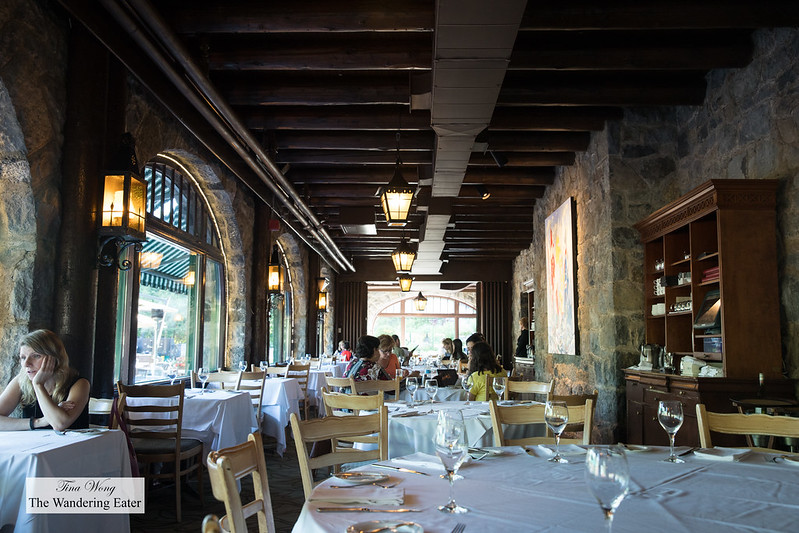 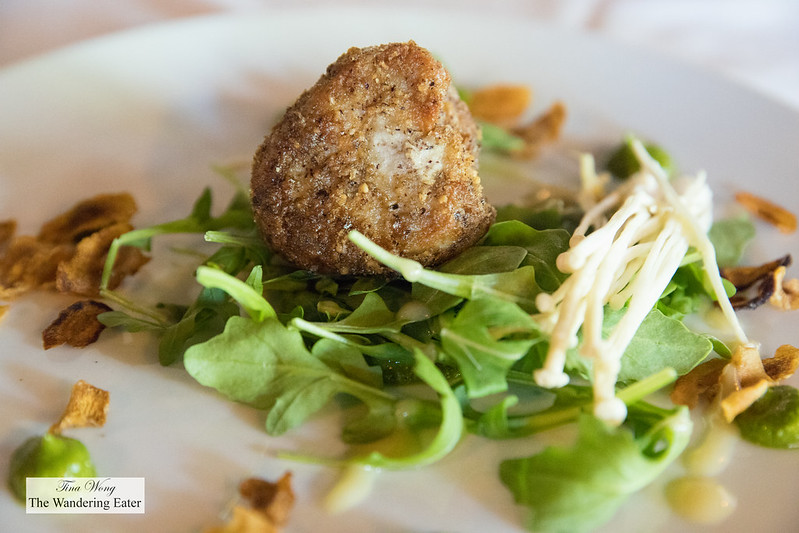 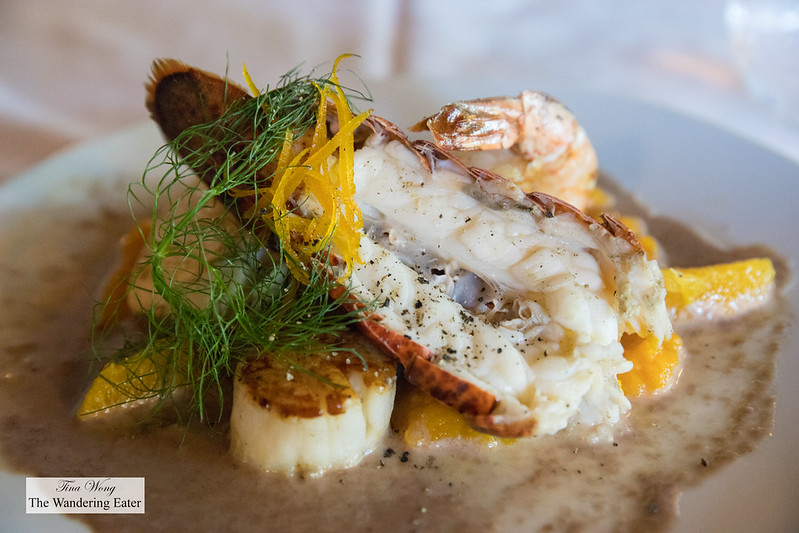 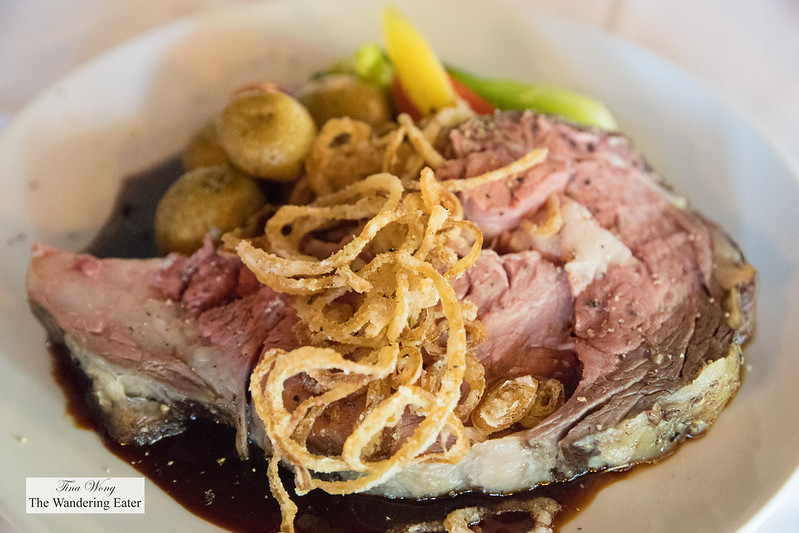 We had dinner at their steakhouse Aux Chantignoles since it was too hot outside for us to dine and join the outdoor barbecue dinner. The food here was good and though the main courses trend heavy and more appropriate for winter since it is meat-heavy, they were tasty. Highlights were the hazelnut-crusted veal sweetbreads that were cooked perfectly and seductively creamy. The seafood-centric main course of scallop, lobster tail, shrimp and halibut, butternut squash purée with wild bergamot sauce is a great pescatarian option and does not feel as heavy as the twelve ounce roast prime rib. The prime rib was probably the best meat entrée of the menu despite there is a small supplement to the prix fixe when we were there. (If you do look at their online menu now, it has changed since we were there on the first week of July.) The staff was friendly and courteous. 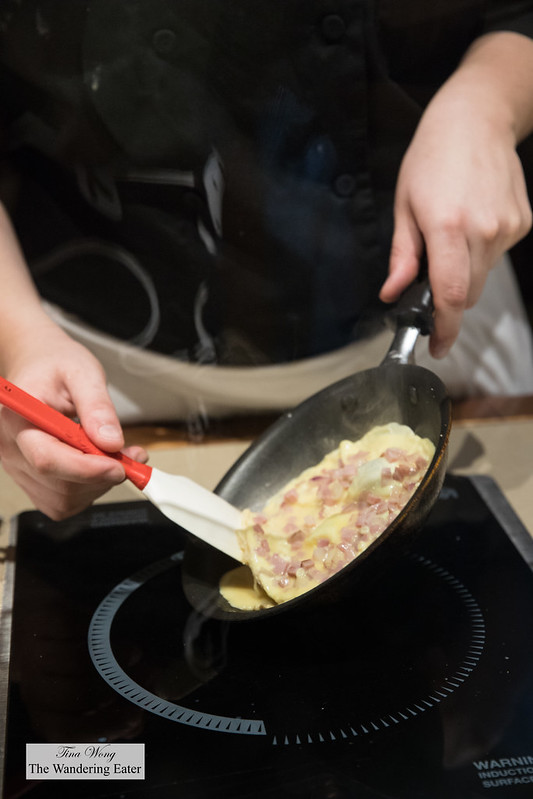 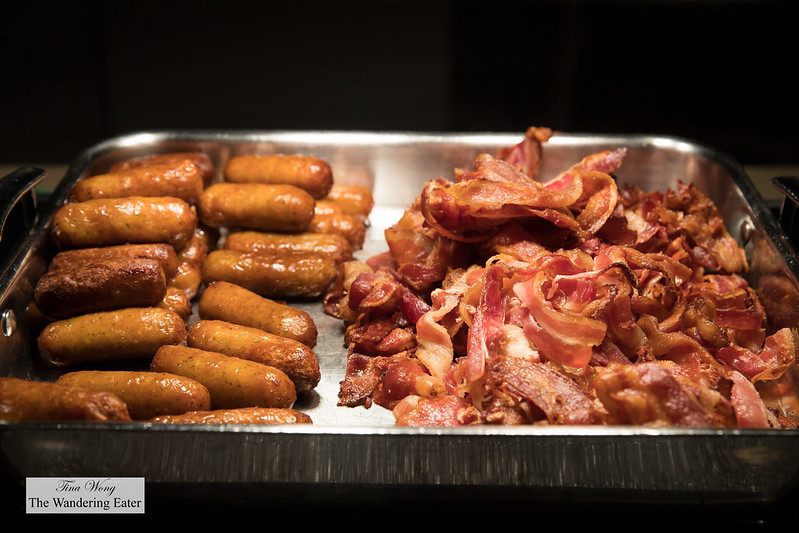 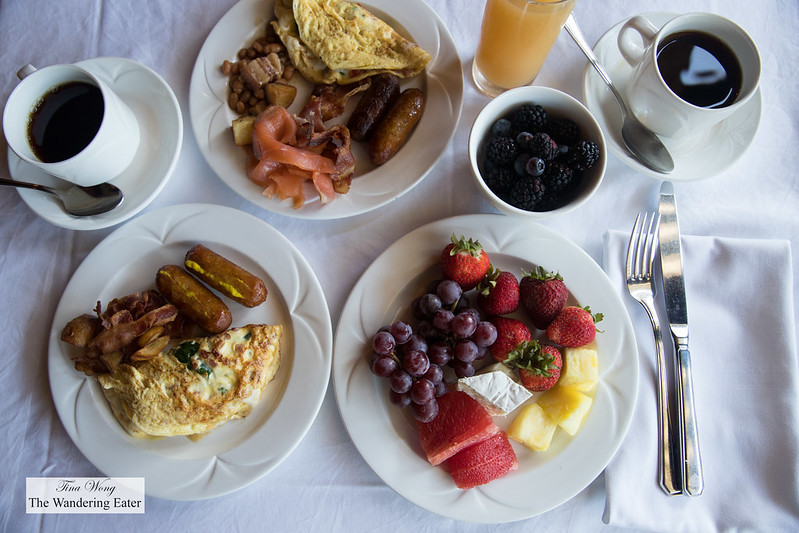 The breakfast was included in the room rate and it was surprisingly good. The coffee was strong but not bitter. There is an omelette station where it’s made à la minute and you customize it to almost any way you would like it. The various fresh fruits available that morning were incredible, especially the blackberries that were perfectly sweet and tart all at once. 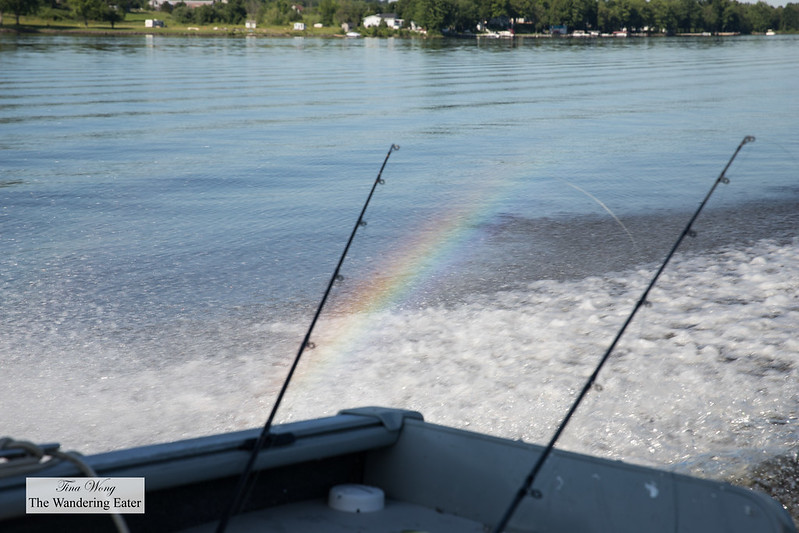 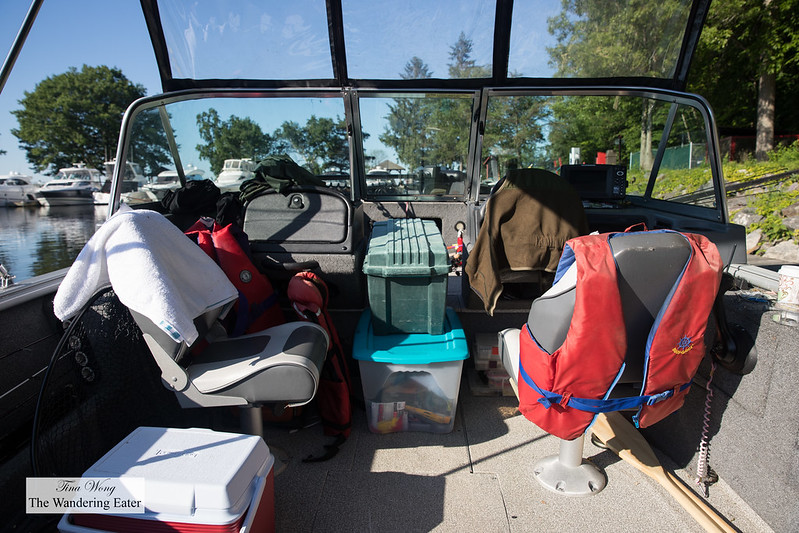 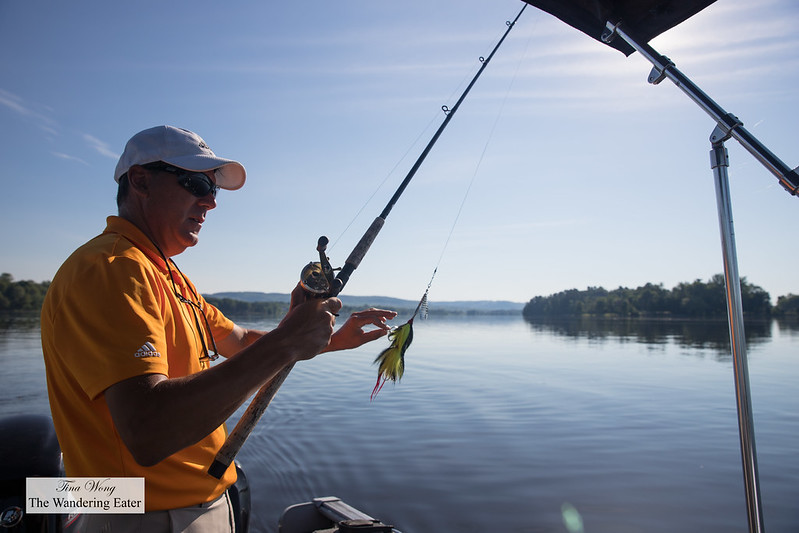 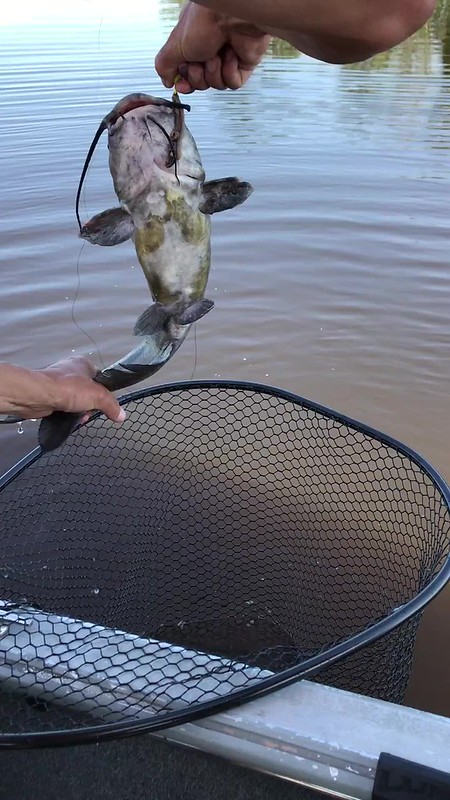 We did go out on a brief fishing trip with the head of the activities department, Pierre. I have never fished before in my life so my thinking was to learn with a professional and on a lake rather than the deep ocean (learn by small steps than grand leaps). So we’ve hopped on a motor boat that’s also fitted with an electric motor too during the mid-morning hours and try to fish. First thing to note, never go out when the sun is beaming down at you.

The fish doesn’t like the heat and bright lights. Pierre informed us that we were technically better off going at the hours before the crack of dawn or at sunset but was optimistic and determined to catch something during our 2.5 hours on the boat with him. I personally have caught a catfish that I am pretty proud of myself and surprised how large it is. Interestingly, he said locals do not eat this large catfish only the younger, smaller ones for soup. (In Chinese culture, we’ll cook and eat that fish at any age ranging from frying to a making a restorative soup.) It was lots of fun despite having the sun beating down at us since we were in the middle of a heat wave. It does make me feel more enthusiastic to go on a fishing trip either here or anywhere else that has such opportunities. 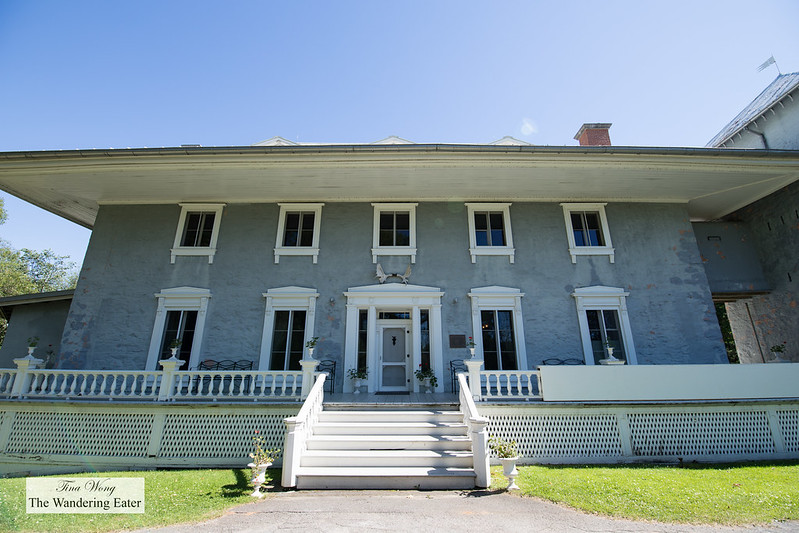 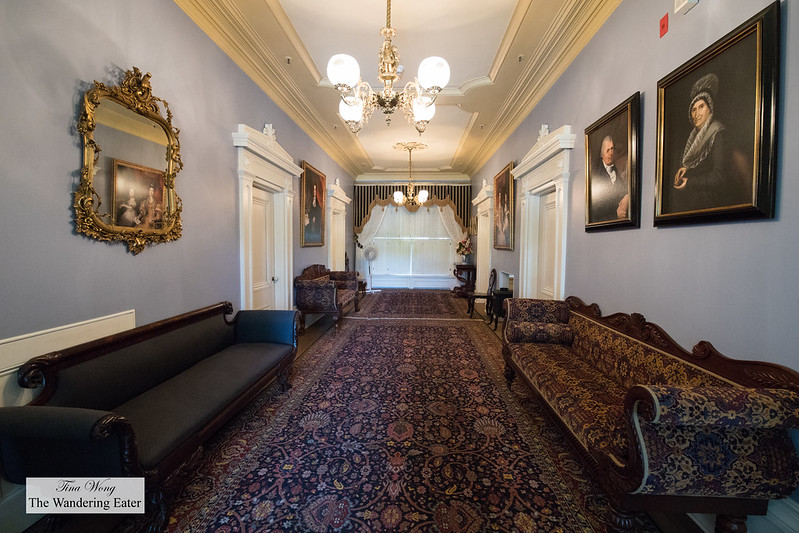 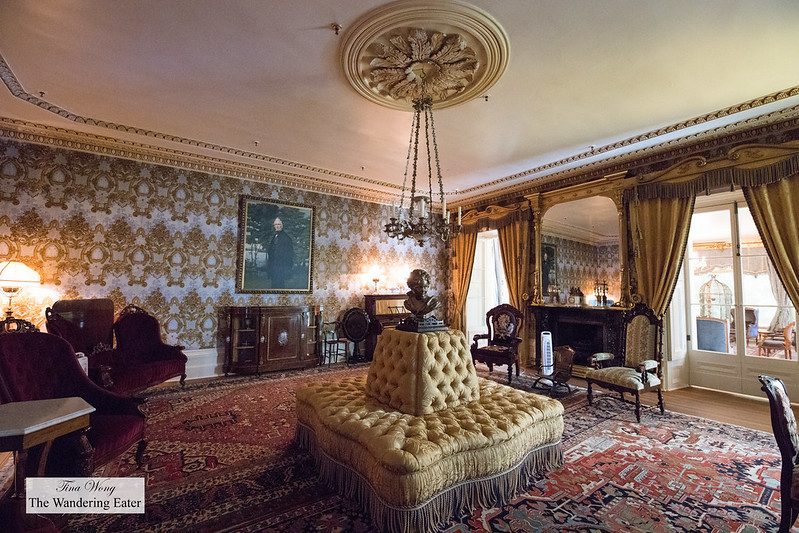 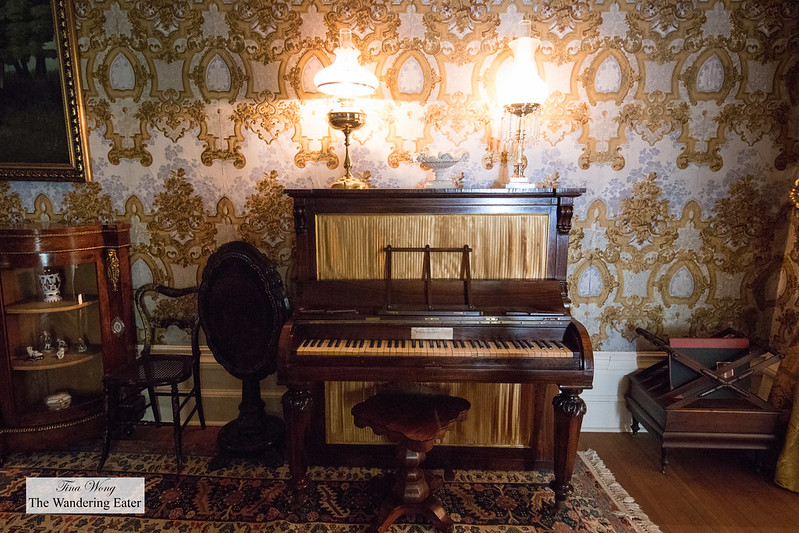 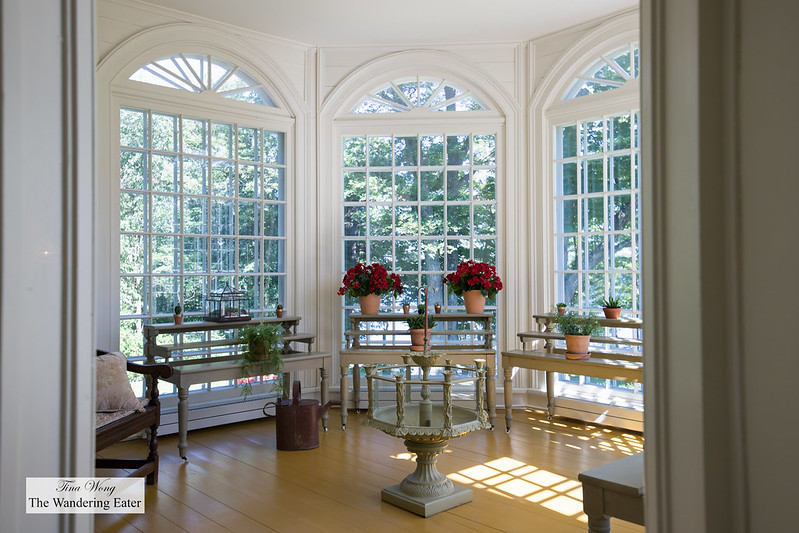 If you do look through Fairmont Le Château Montebello’s lengthy activities list that is included in the Resort Fee, it includes a visit to a historical site named Manoir Papineau. This grand 19th century estate of Louis-Joseph Papineau. He was a lawyer, seigneur (lord) of the seigneurie de la Petite-Nation, and leader of Lower Canada’s Patriote movement. He participated in the Lower Canada Rebellion of 1837-38 against British rule, was exiled, and lived in America and France before returning to the Province of Canada in 1845.

The details of this home is pretty crazy (in a great way) and I could not help but ogle at the beautiful antiques and furniture at this home. (And that dreamy sun room!)

The Manoir is architecturally interesting because Papineau was influenced by both French and American styles. While the north façade borrows a mid-19th Century North Carolinian antebellum plantation style, the asymmetrical south side is French, featuring two differently-shaped turrets.

An interesting factoid about this place, the actual land of the original estate took up both its current space and where Fairmont Le Château Montebello is situated (65,000 acres). The family had to sell part of the estate to pay off debts years after the Mr. Papineau passed away. The sold parcel of land eventually became the resort and it explains the partnership between the two. (To view more photos of the visit of Manoir Papineau, please view the photo set CLICK HERE)

Overall, this excursion to Montebello was fantastic. I wish I could stay at Fairmont Le Château Montebello for a week (or longer) and feel relaxed from the crazy buzz of the city. I was informed this hotel will be undergoing renovations in a few months but still be operating. It will be exciting to see the updates for the hotel once it’s done.

To view more photos of this hotel visit, please view the gallery below or CLICK HERE for the photo set: