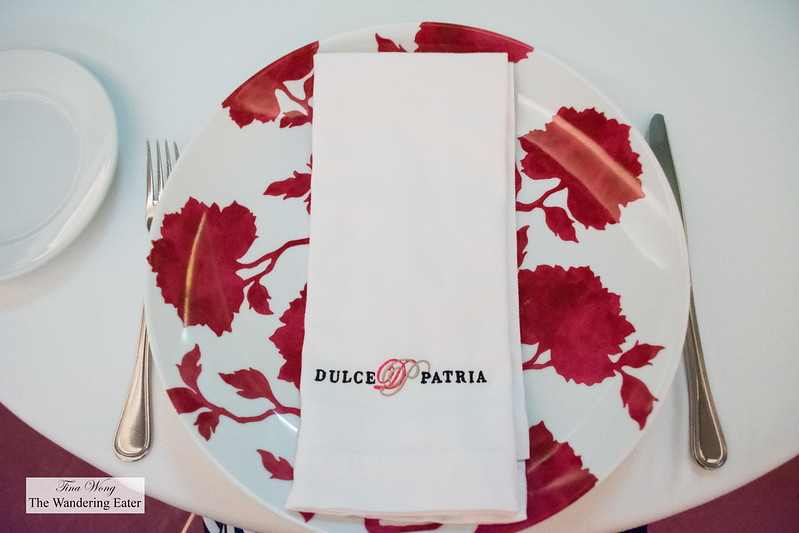 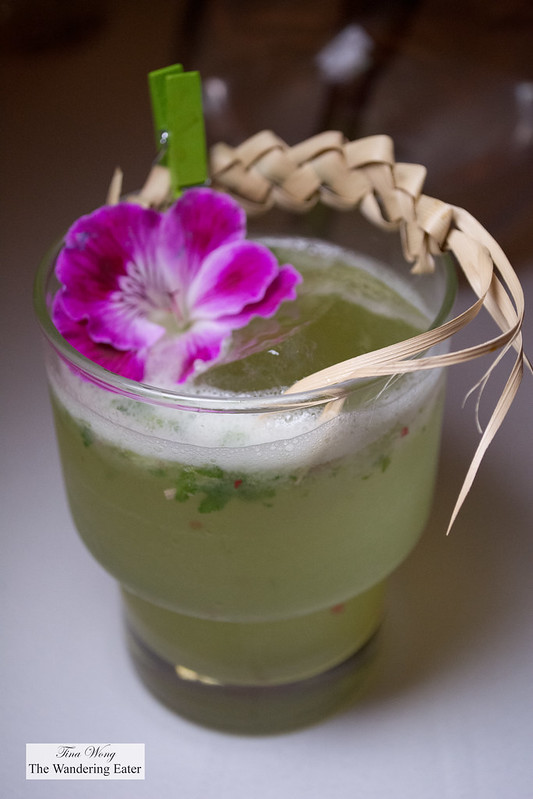 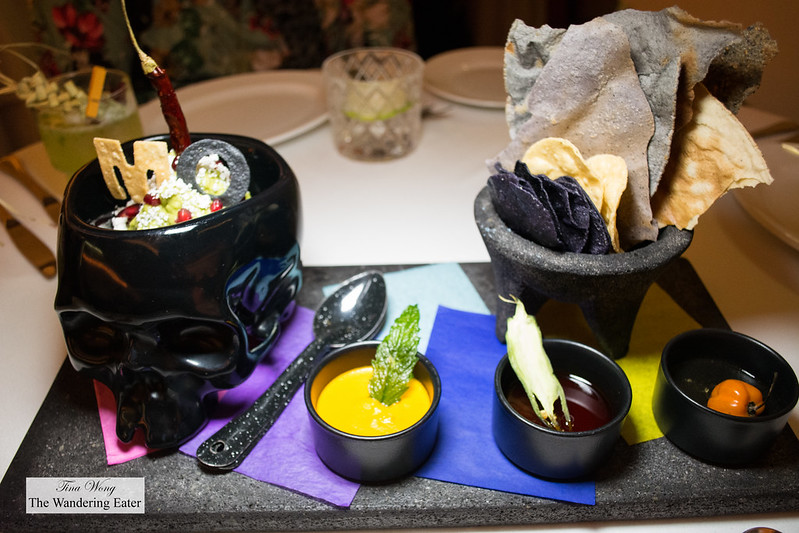 There’s a healthy number of fine dining Mexican restaurants in Mexico City. The most obvious and most talked about restaurant is Pujol, which I will write about soon but there’s also a restaurant led by a strong woman, chef and restauranteur Martha Ortiz called Dulce Patria, meaning Sweet Homeland. (Ms. Ortiz has another restaurant, Ella Canta in London, U.K.) This restaurant is consistently listed among Latin America’s top 50 restaurants for the past few years. The restaurant had tables filled with diners on a Wednesday night and enjoying Chef Oritz’s bold, vibrantly flavored food that has an artistic, sensual, female perspective to Mexican cuisine. It’s elegant, unapologetic, and her cuisine shows her unabashed love of her country.

The first thing you would notice when walking over to Dulce Patria in the upscale neighborhood of Polanco, is its bold pink front doors and large gold, baroque design. The dining room on the ground floor, where we were seated, the decor is a confection of pinks and reds, embroidered chairs and vases spilling over with flowers. Once we have settled down, a beautiful cocktail of mezcal, lime, and cilantro decorated with a braided palm bark was sent to our table. It’s a great drink that is balanced from the high quality mezcal used and the brightness of the lime and herbaceous cilantro to give it some lift.

The M.O. guacamole with a trio of house made moles and toasted tortilla chips were delicious. The very good, creamy guacamole was topped with the chef’s initials made of tortilla chips and made the presentation fun. The moles were distinctive and ranged from mildly spicy to very spicy for the one topped with a habanero pepper. 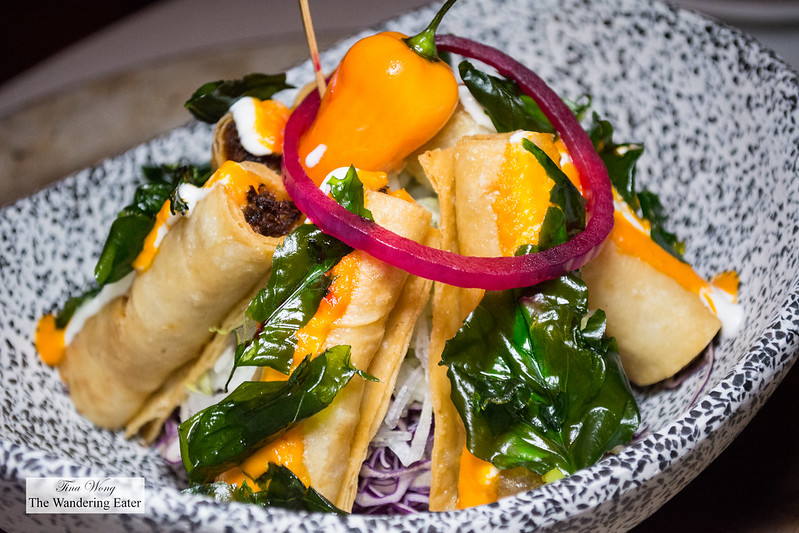 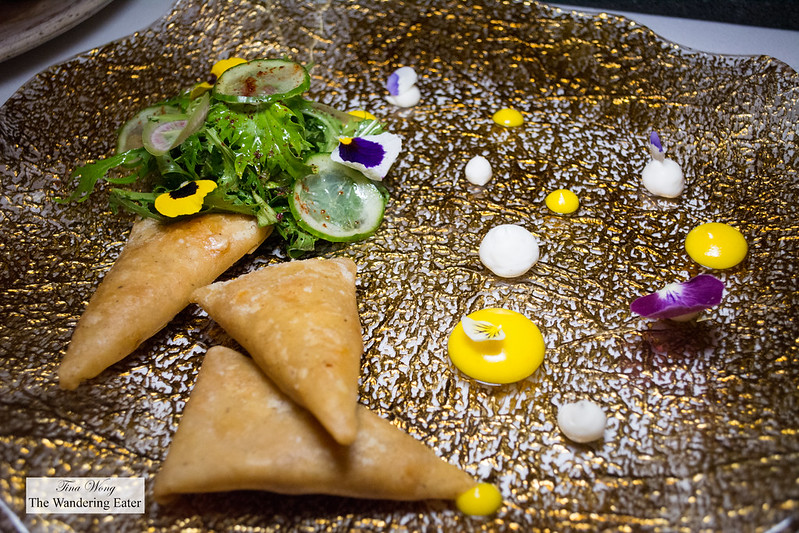 The chilorio tacos with orange, chili pepper sauce and peanuts, on a bed of lettuce and purple cabbage was tasty. Chilorio is from the Mexican state of Sinaloa, which is in the Northern part of the country. It’s essentially a version of pulled pork tacos brightened up with a citrus sauce. These are wonderful as they were also deep fried (and isn’t greasy) for crispiness besides having a juicy pork taco with a lovely orange-chili pepper sauce. The quesedillas filled with a goat cheese mixture is served with large dots of with salsa sultana (cheese with espazote, squash flowers, huitlacoche with cheese). The quesedillas were very good when you combine the dots of sauces. 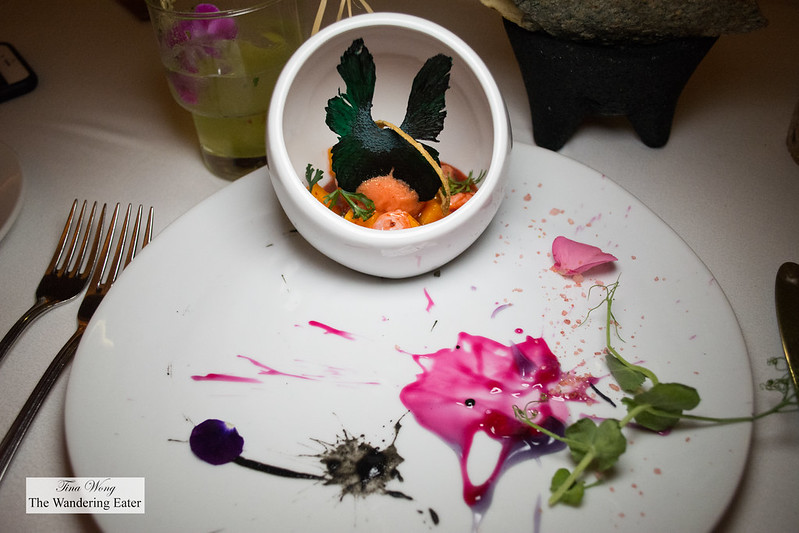 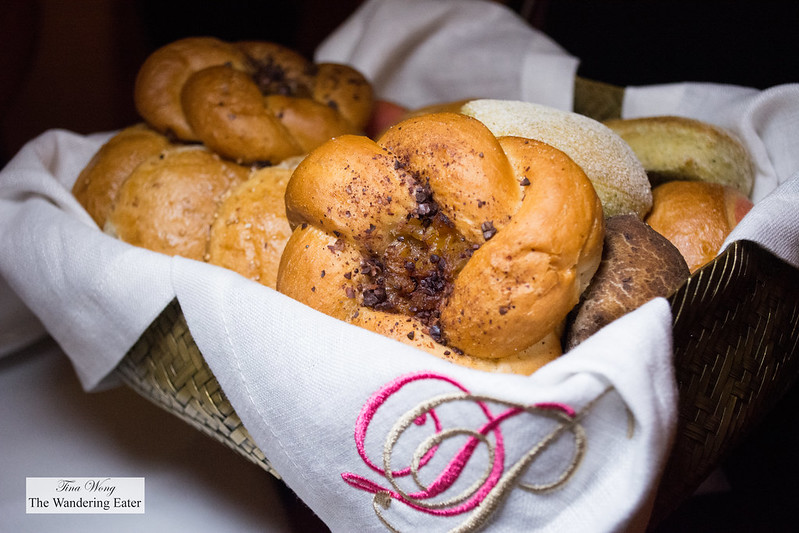 The “vampire” ceviche marinated in sangrita, mango and topped with a pineapple butterfly was a stunning dish both with the eyes and the palate. The bright, acidic flavors of the various citrus juices used in the ceviche marinade wakens up the palate but it’s sweet enough that it’s not a tart dish. The chunks of fish absorbed the sweet marinade and worked nicely with the similar sized chunks of sweet fresh mango and segments of blood orange.

Bread service arrived and we were presented with a lovely basket of various breads. While I admit I cannot remember the names of them, I do recall there were at least five different types and they ranged from savory to the slightly sweet end for a neutral bun. Texturally, they were all fluffy and just moist rolls. 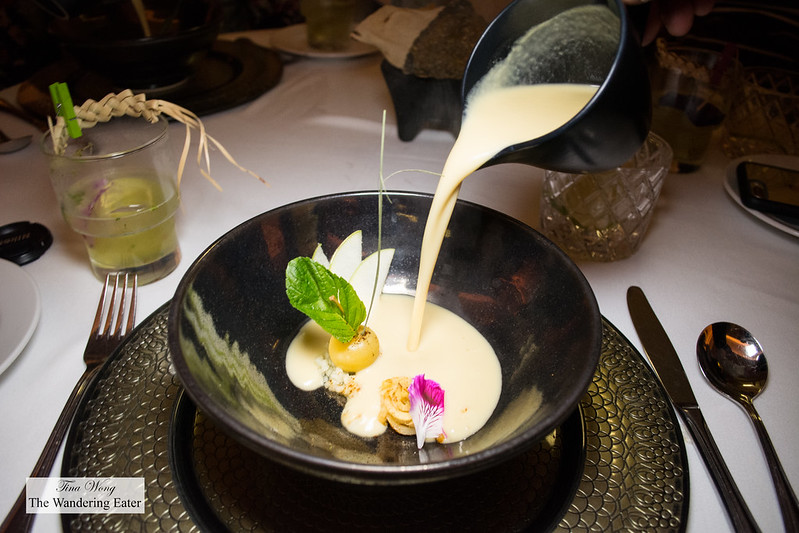 The corsage of pumpkin flowers in a toasted almonds tumeric cream soup was a delightful soup that wasn’t heavy. The plating and presentation of it was elegant and same applies to the flavors of this light yet creamy soup. 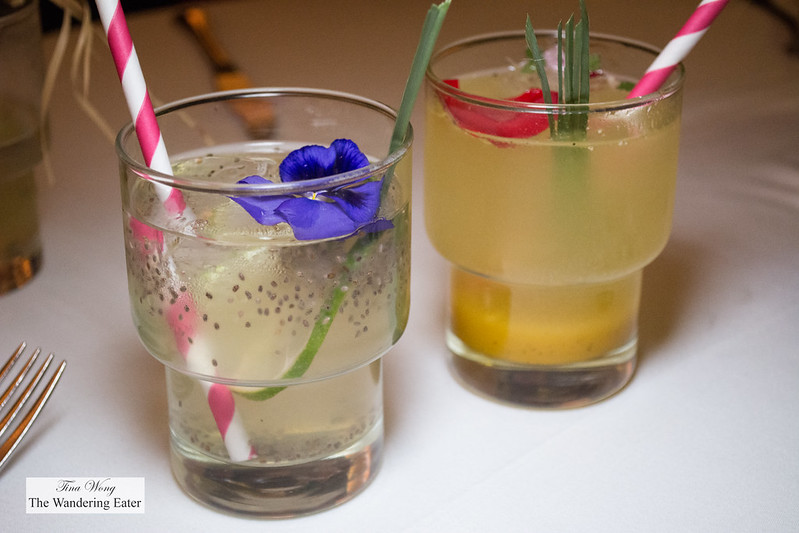 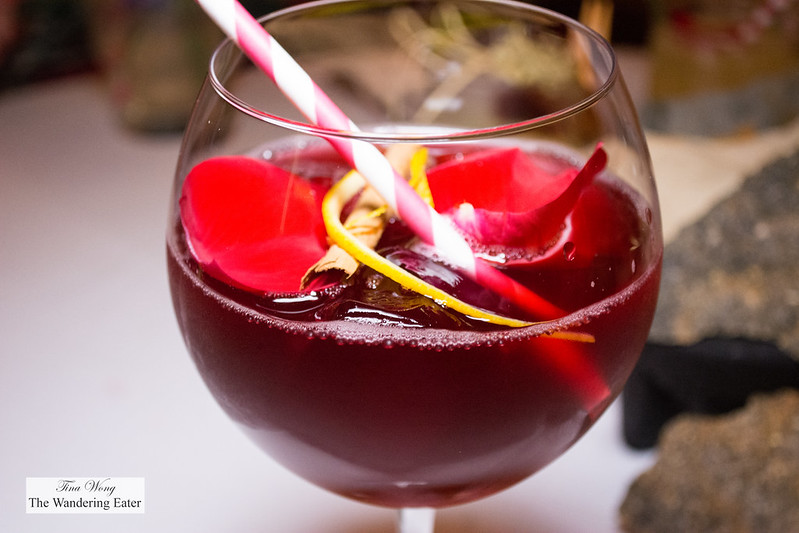 We had a few house made agua frescas – lemon with chia agua, mango passion fruit soda, and a large goblet of jamaica (hisbiscus) delicately flavored with rose. All of these non-alcoholic beverages were colorful, refreshing and bright. Perfect for the equally bold flavors of the fare served. 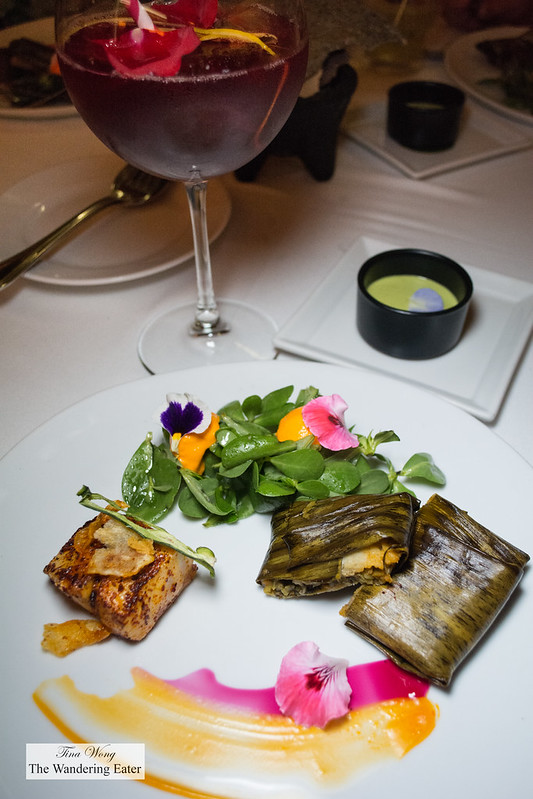 The ajochile sea bass with hoja santa tamale with fresh purslane salad was a beautiful plate especially with the brightly colored stripes of orange and magenta-pink sauce. The sea bass with earthy spicy from the peppers used and perfectly cooked. The tamale and purslane salad added some herbaceous punches to the dish. 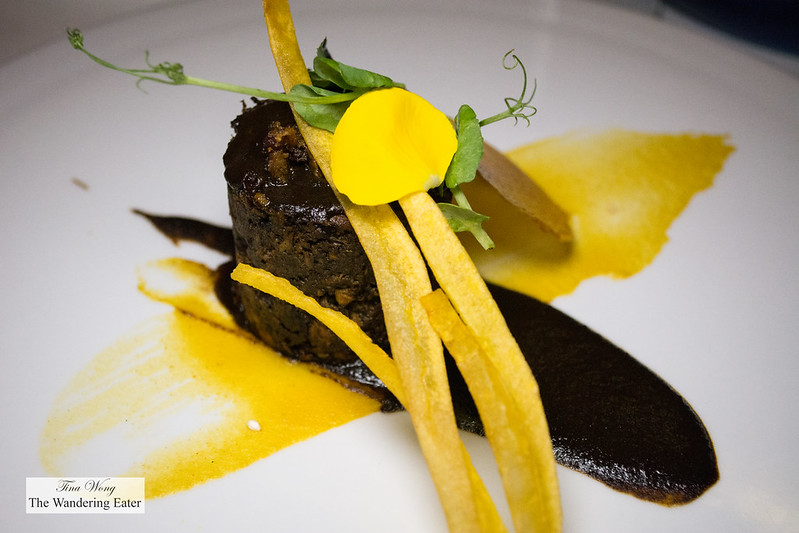 The duck in mole negro, fried banana plum served with a side of corn flavored rice was a hearty dish. The dark mole was complex – a little bit bitter, sweet with a touch of tartness that enlivens the rich sauce. The tender duck worked wonderfully with the sauce and the crispy banana chip added some texture to all of the softness. The rice was a good accompaniment to the dish. 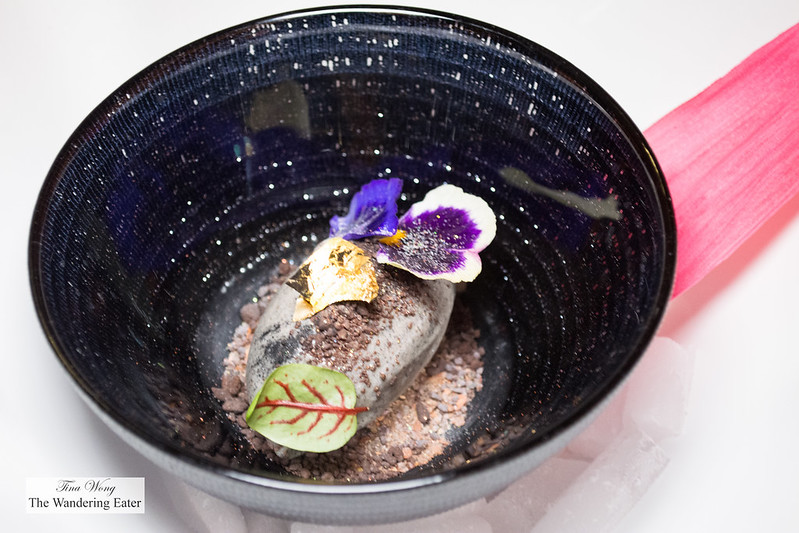 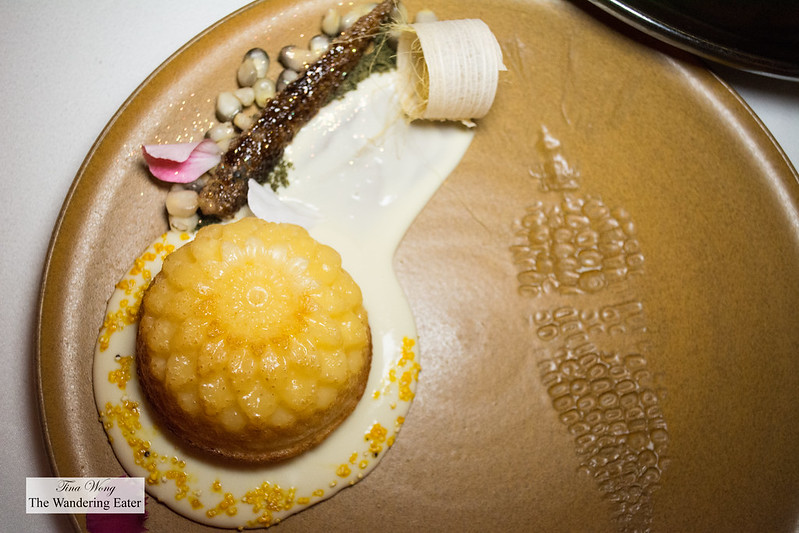 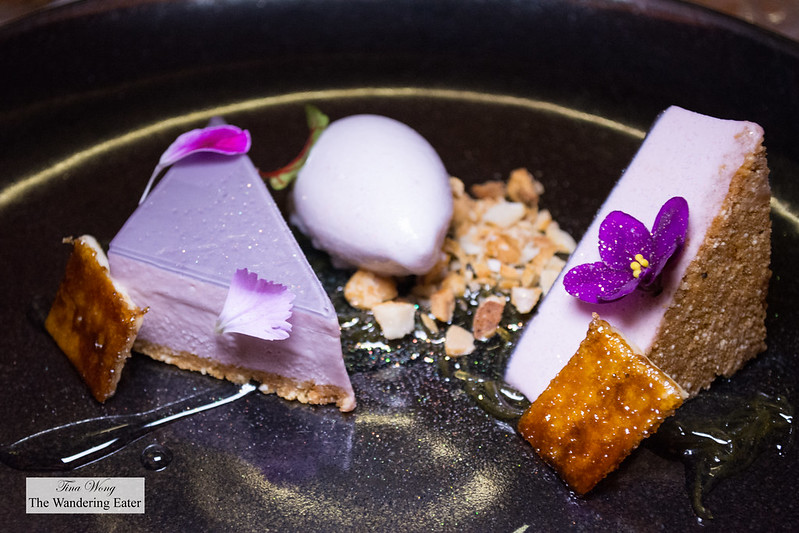 When it came to desserts, it’s hard to choose a favorite since they all mesmerize your eyes with presentations and plating and they just taste damn good. The video for The Rain That Doused the Fire dessert features a charred cacao, white chocolate ice cream served with chocolate “sand” that was flavored with Mexican spices like anise, cinnamon, and ginger. The pan de elote with chamomile cream sauce was soft corn cake (softer than the typical American cornbread) and a touch gooier since it is made with condensed milk. The chamomile cream added a soft floral flavor to the sweet cornbread.

The prettiest dessert of the three is called The Maria. The concept of Maria is a Mexican woman who changes her dress and the dessert’s flavor changes once a month – and this month’s Maria is violet. It is composed of violet cheesecake, amaranth and chocolate cookie base topped with lavender violet lime gelatin and taro and white chocolate ice cream. The violet flavor just comes through without being too floral or perfume-y and the cheesecake was divinely smooth and creamy without being too heavy. The ice cream was perfectly creamy, rich and the right amount of taro and white chocolate. 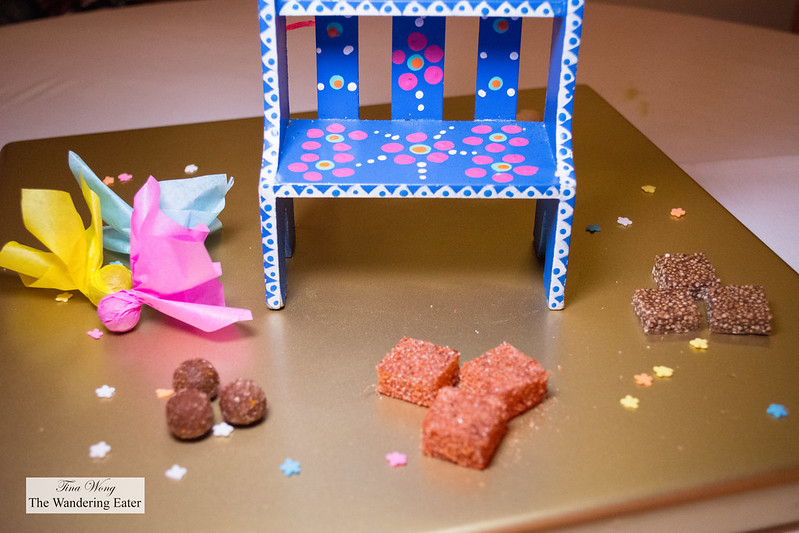 There were petit fours arrived with a large tray fitted with a festively painted chair and filled with housemade Mexican traditional candies with a twist. There were Glorias, a sweet, chewy caramel-like candy made of cajeta, nuts, milk and sugar. Tamarindo con chile and mango con chile were classic sweets you can find almost anywhere in the city but this is a refined version without being too overwhelmed with chile. The Chocolate Alegrías, a crunchy canndy made with amaranth seeds, piloncillo syrup and honey were my favorite.

The dinner was fantastic. The food was lovely and tasty. The service was impeccable and friendly. The staff does speak English well, if it’s a requirement.

To view more photos of this dinner, please view the gallery below or CLICK HERE for the photo set: