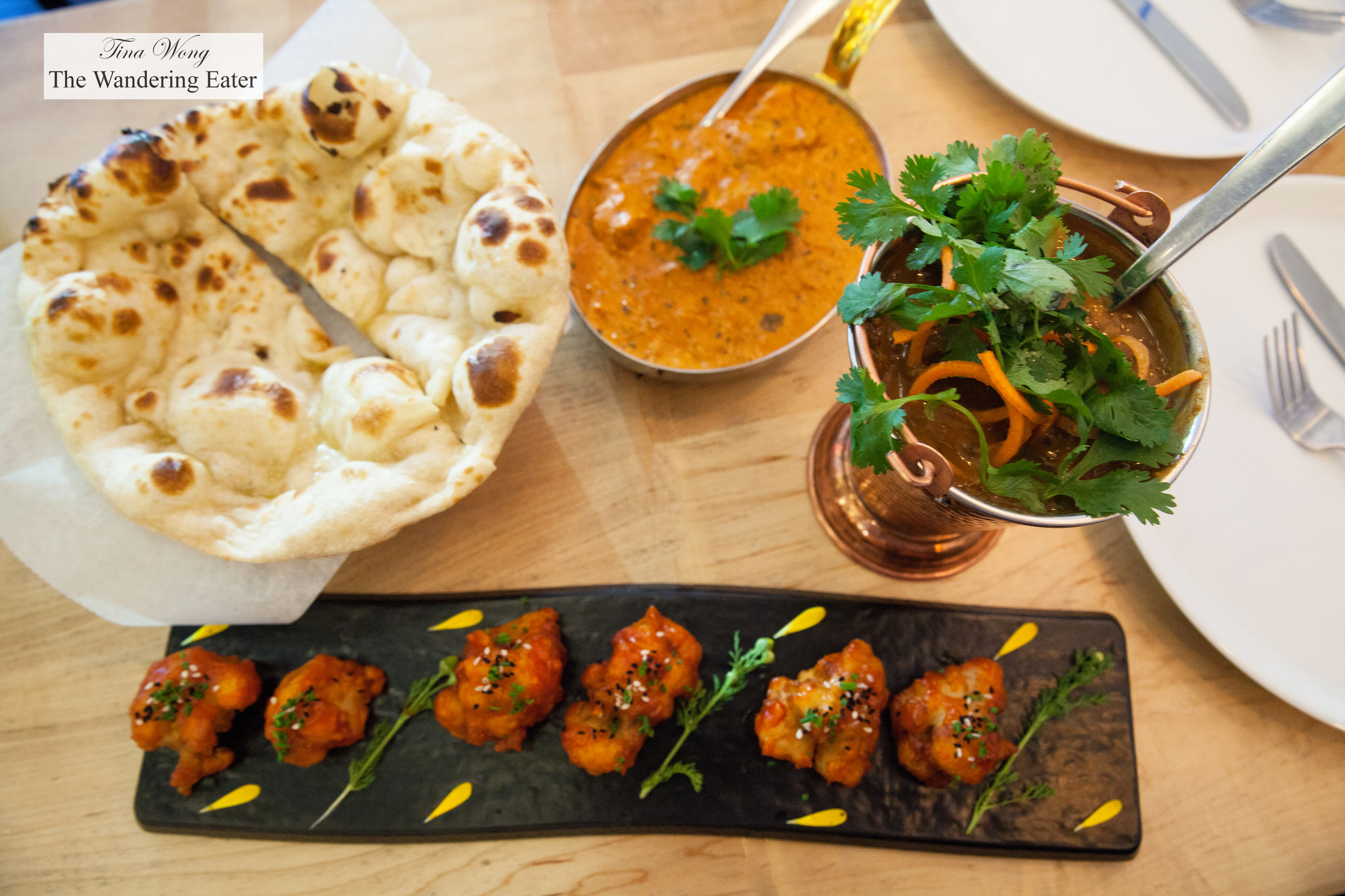 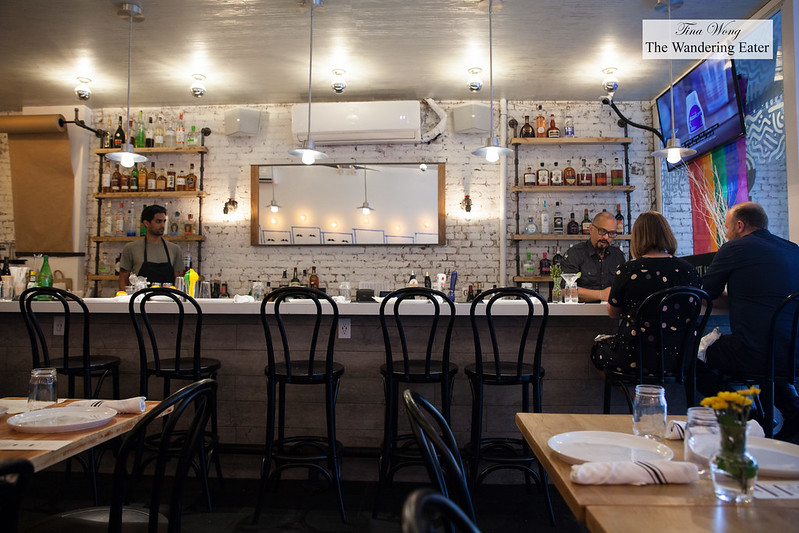 We recently had a delicious dinner at Badshah in Hell’s Kitchen. It’s a fairly new restaurant with Executive Chef Charles Mani, an alum of Babu Ji, and he was present throughout the entire evening we were there bringing out the food to various diners. He is an effusive, warm chef who deeply cares about how his food tastes and putting an ancient cuisine (Indian) and taking it in a different direction. 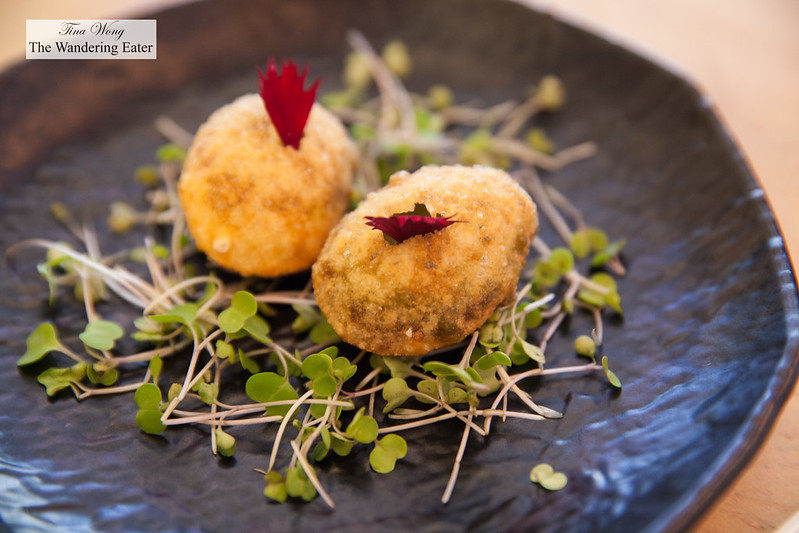 We started off with drinks of Indian Rose and mango lassi. The latter is self explanatory and we appreciated the yogurt drink wasn’t too sweet but had enough mango peeking through the thick yogurt. The Indian Rose is a refreshing, slightly bitter cocktail made of grapefruit granita and sparkling rosé that feels right to have on a summer evening. Our first bite of the evening is the gol goppa, a common street snack made of crisp, fried, hollow semolina balls filled with a mixture of three different fillings (I can recall a minty chutney and a creamy, tangy yogurt) that woke up my palate having the range of herbaceous, tangy, spicy and menthol-cooling. It’s the best amuse bouche I’ve had in a long time. 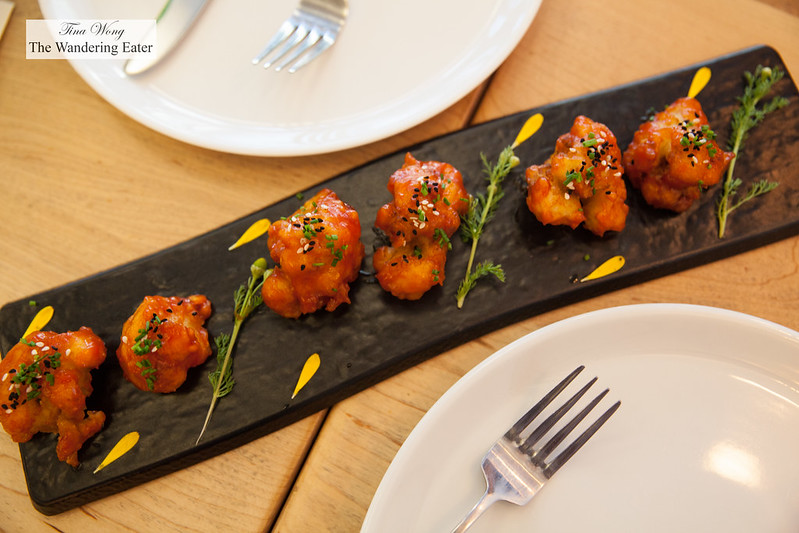 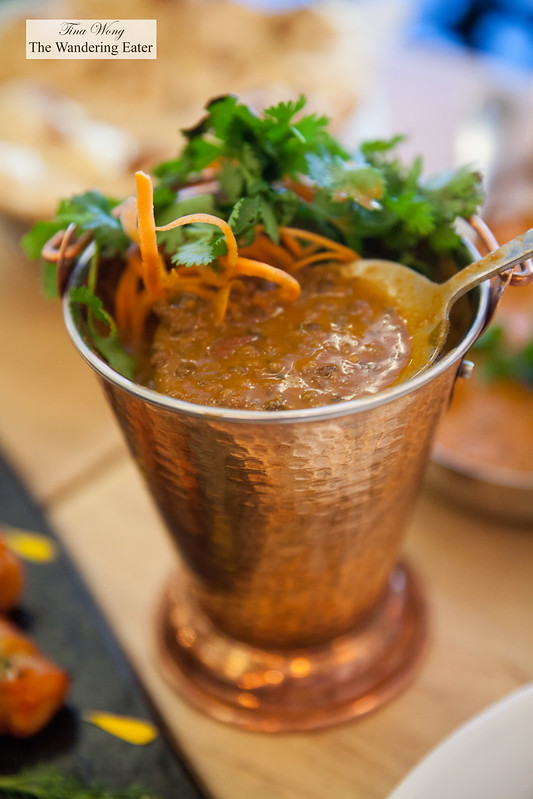 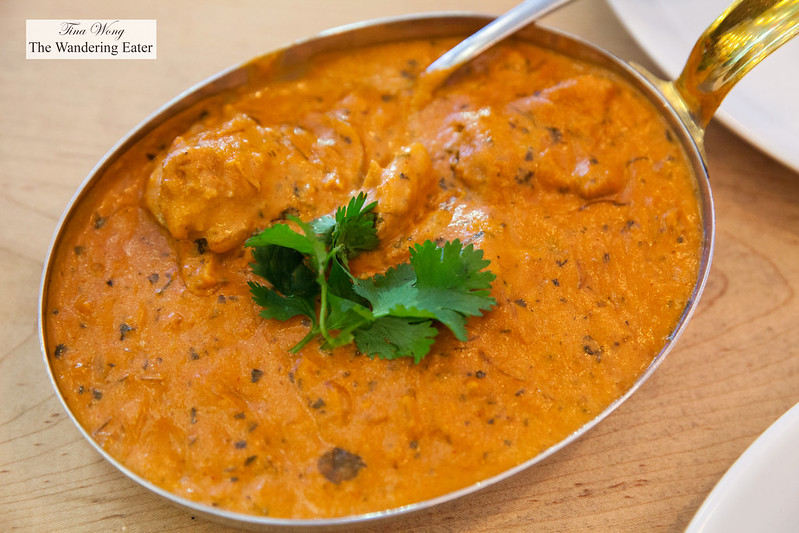 The Badshah cauliflower was a delicious, Indo-Chinese style cauliflower that’s beautifully fried with the crisp exterior and the almost creamy cauliflower. The sauce that just covers enough was tomato-based and pleasantly sweet end without being cloying. The daal makhani is a mildly spicy black lentils and kidney beans dish that was simmered on slow fire overnight with ginger, garlic, plum tomatoes and butter. It’s delicious with their warmed naan.

The butter chicken is stuff of chicken curry dreams are made of. The chicken was cooked until it’s tender but not overcooked. That curry butter sauce! Oh, that sauce made me want to eat a ton of carbs with it ranging from rice to naan. It is dangerously delectable. 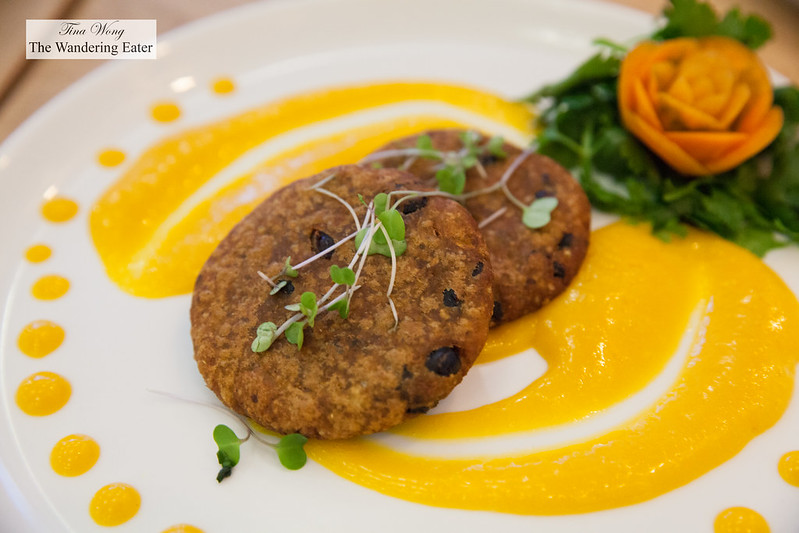 The quinoa tikki slowed down our pace for the second portion of the meal. The perfectly fried patties of quinoa, potatoes and black-eyed beans were earthy spicy, creamy yet not too heavy on the stomach (though we were pretty full by then). The pineapple, mango ginger chutney (the chef likes to purée his chutneys) take these patties to a different level in terms of flavors. 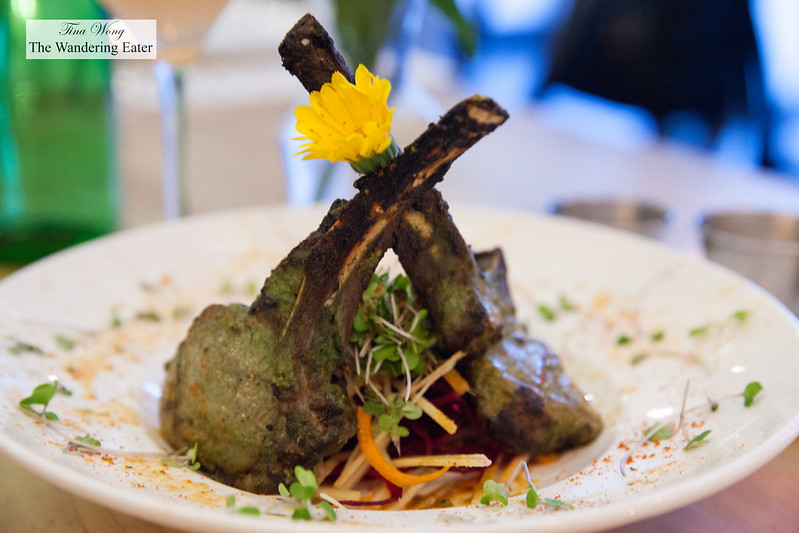 The tandoor clove smoked lamb chops were special. The chef marinated the lamb with sour cream and cream cheese to tenderize the meat perfectly and adding some salt. Before he places them in the tandoor oven, it’s slathered in an herbaceous and spiced, clove masala and cooked to our preferred temperature of medium-rare. 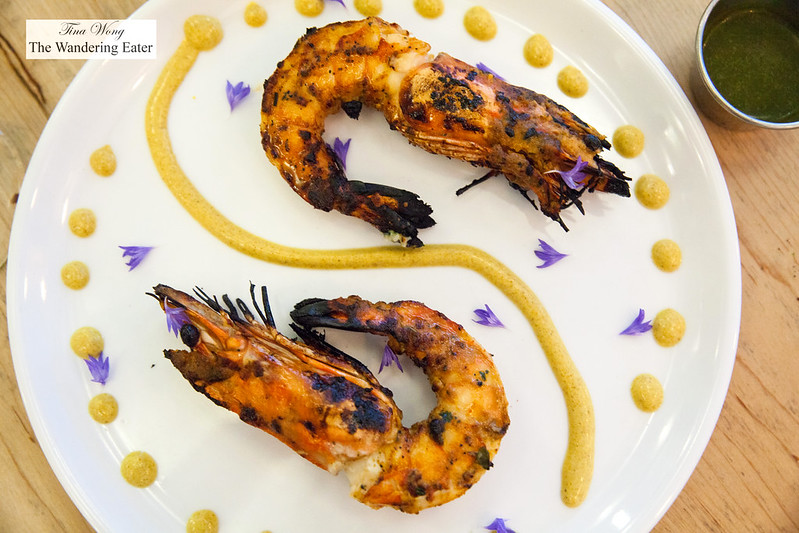 The other tandoor we had was Fisherman’s Catch of jumbo prawns seasoned with carom seeds were delicious. The most flavorful part was sucking the head of these crustaceans to get the intense sweet, ocean-y flavors. 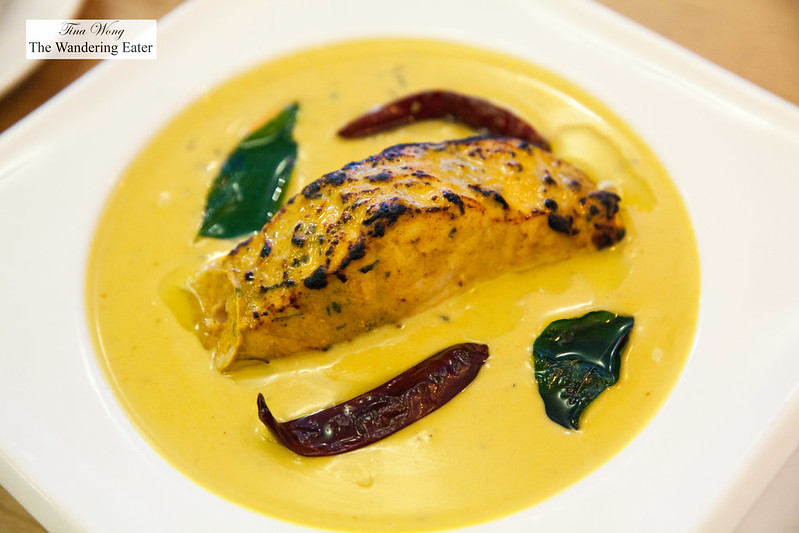 Another great dish was the char grilled salmon with coconut curry sauce. I think I have eaten a fair amount of coconut curries from various South Asian and Southeastern Asian cuisines but most tend to have a murky, spiced coconut curry flavor. At Badshah, the coconut curry is the distilled essence of coconut milk that’s been cooked for eight hours then the curry and other seasonings are added so the clean flavors really shine. The salmon was cooked through and it had a nice amount of smoky, earthy spice but it’s plays a secondary role (but that’s perfectly ok for me on this dish) and it made me want to eat another bowl of rice and a basket full of naan to dip in the curry. 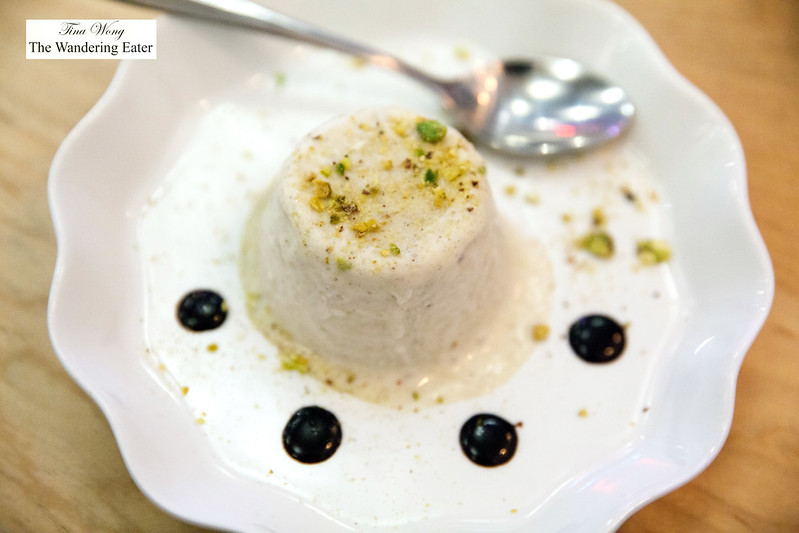 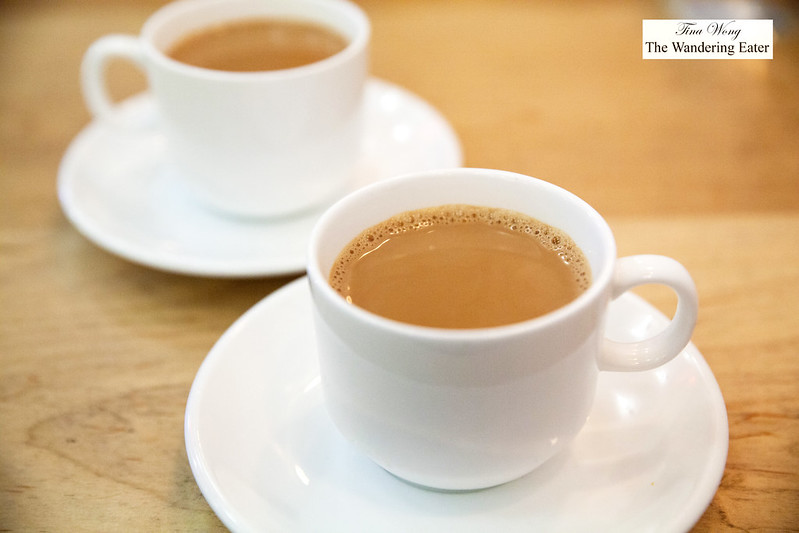 At the end of this meal, we had a flavorful pistachio, cardamom kulfi ice cream. While the texture and flavors of this style of ice cream is on point, I find it too sweet for my preference. (I know Indian desserts tend to be on the sweeter end.) The masala chai were piping hot cups of tea that’s barely sweetened and delicately spiced like I prefer my chais.

The meal was very satisfying and delicious. The service was good though they were a bit slow with coming out with our drinks but everyone was friendly and are enthusiastic about the various things served in this restaurant. I would definitely come back and eat here again.