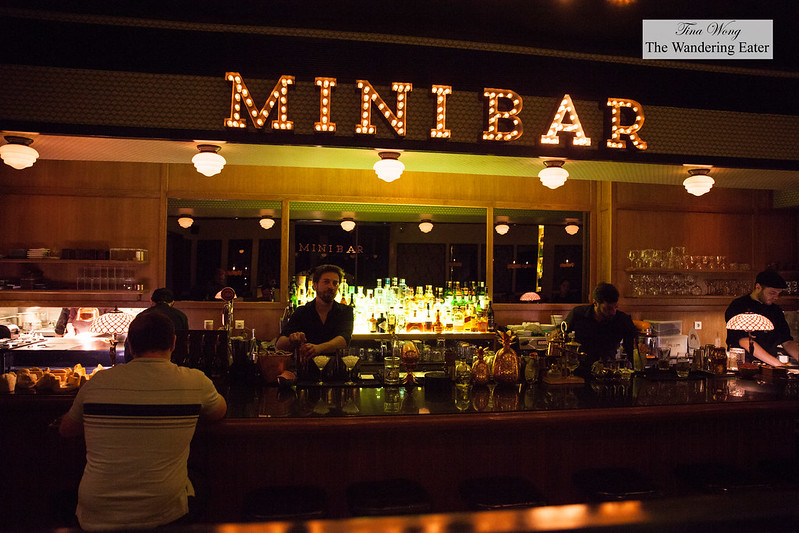 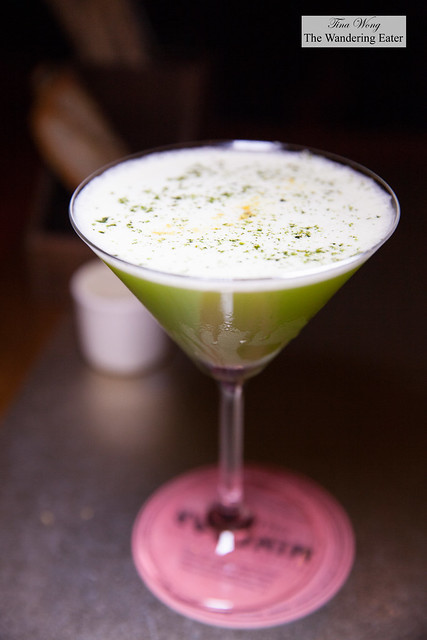 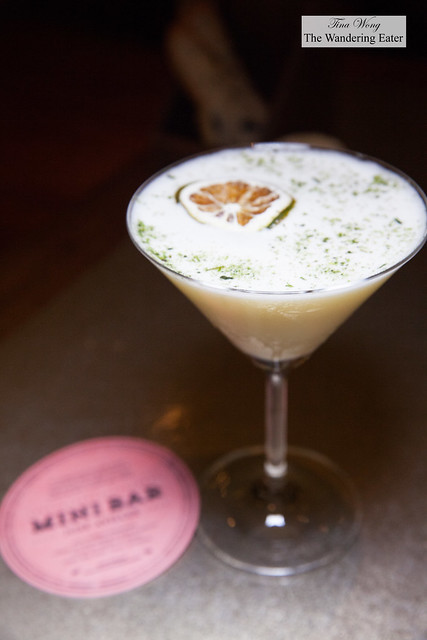 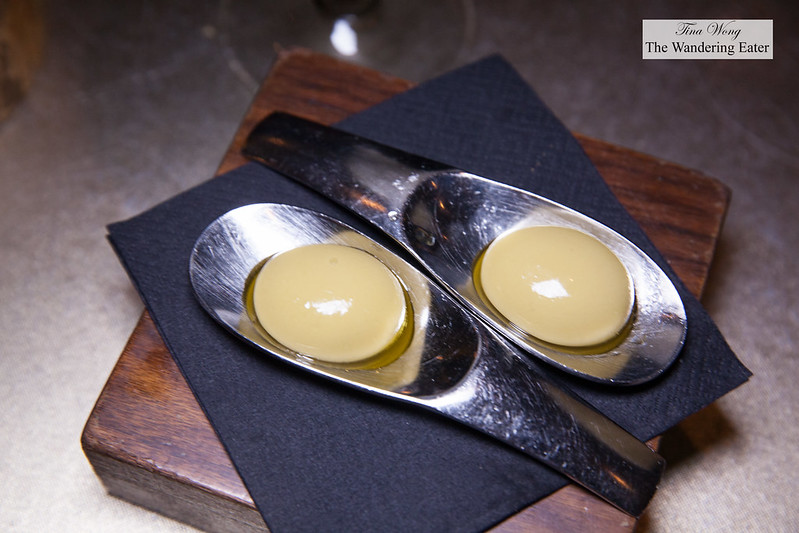 If you want dinner that is expertly prepared and cooked with seriously good cocktails without the pretense in Lisbon, I would steer you to Mini Bar, one of Chef José Avillez’s eight restaurants in Lisbon and he’s the few chefs in Portugal pushing the country’s cuisine to the modern times (and he is also a Michelin-starred chef).

For those who have been to Barcelona and dined at Tickets, Mini Bar’s casual atmosphere and food feels like an homage to the restaurant, since Chef Avillez has worked with Ferran Adria at El Bulli. The ‘El Bulli olives’ that kick off our Epic Menu (48,5€ per person) were as good as the ones I’ve had at Tickets. The “olives” are made by reverse spherification and the texture is essentially felt like pure liquid and the flavors are a cross between a fantastic fruity olive oil and a superb brine Spanish olive.

I had the cocktail called Macbeth (17€) made of Gin Mare, elderflower, almond, lime, and coriander was an amazing cocktail that maintained a balance between floral, herbal and sweet and all flavors were distinctive. The Pierre (12€) is Cognac, Campari, hazelnut, and elderflower is a bit richer kind of a drink than what I’ve expected but still a very delicious drink. 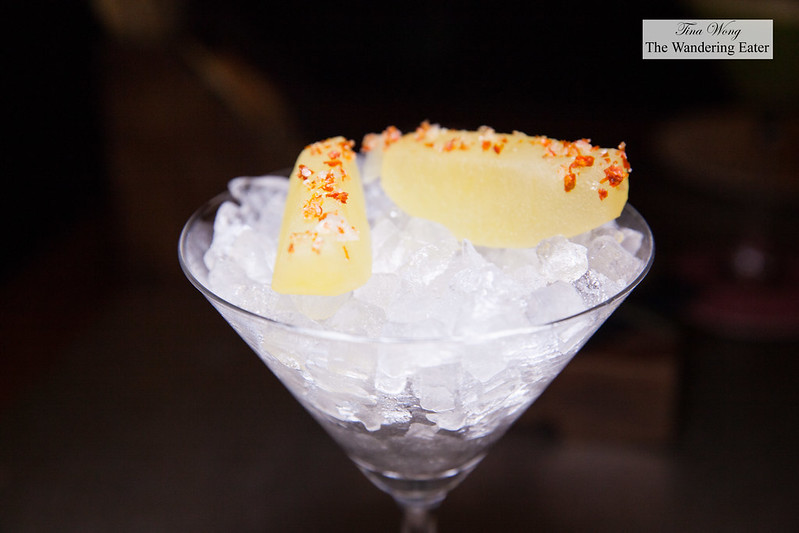 The edible cocktail of green apple and spearmint margarita is a playful dish that has vacuum sealed slices of green apples that has absorbed the flavors of the mentioned margarita but retained some crispness of the apple with a spicy salted edge that would have been on the rim of a glass. 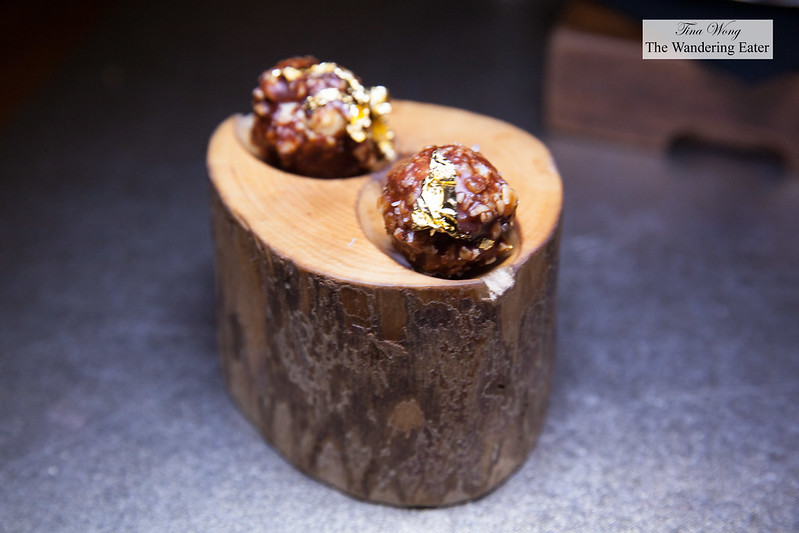 The Ferrero Rocher course looks like the chocolate confection but it’s actually a unctuous foie gras ball and decorated as the mentioned candy. It’s delectable and not sweet at all. I wish I could have half a dozen of these any day. 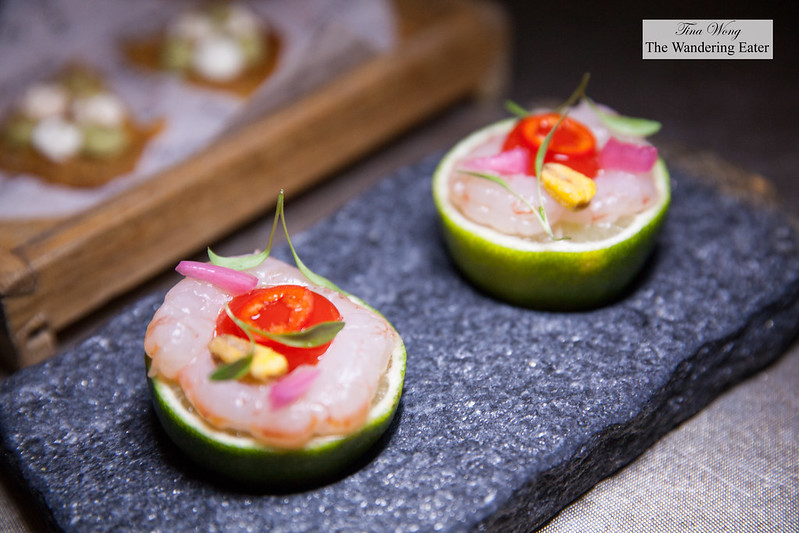 The Algarve prawns in ceviche was served in an unusual way – on a lime. We have to eat it like a shot and squeeze the lime a little to get the hit of acidity. The ceviche was refreshing, slightly nutty flavored and sweet from the prawns. 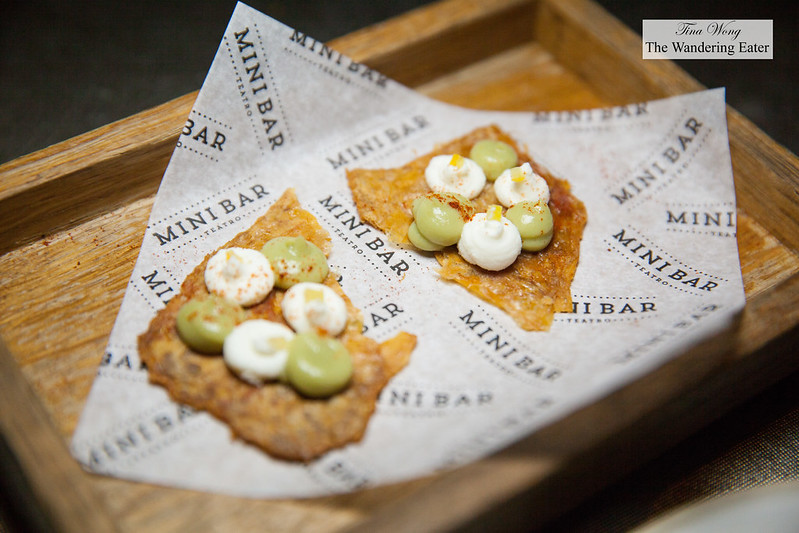 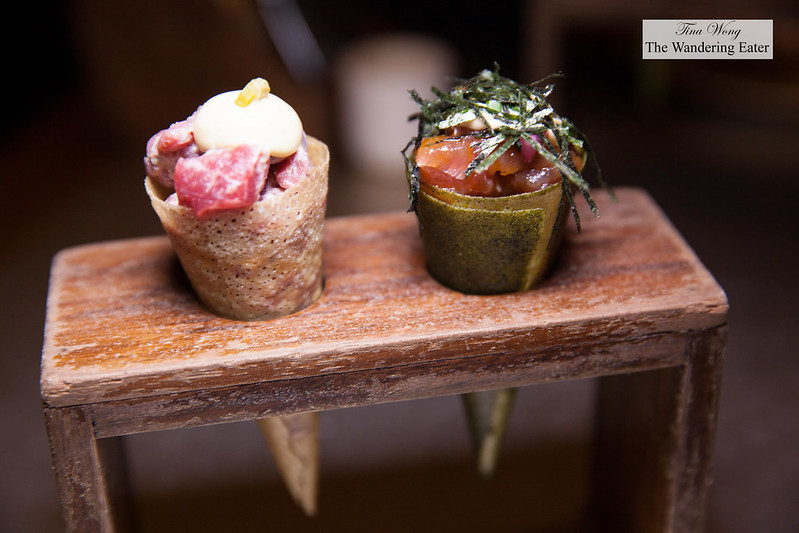 The duo of tartar cones out next and it does look like savory ice cream cones. The tuna tartar temaki cone with spicy soy was delicious and incredible flavors of the tuna and soy sauce and aioli the crispy seaweed cone added extra umami. The beef tartare with mustard emulsion was silky and the zesty mustard was a great contrast. 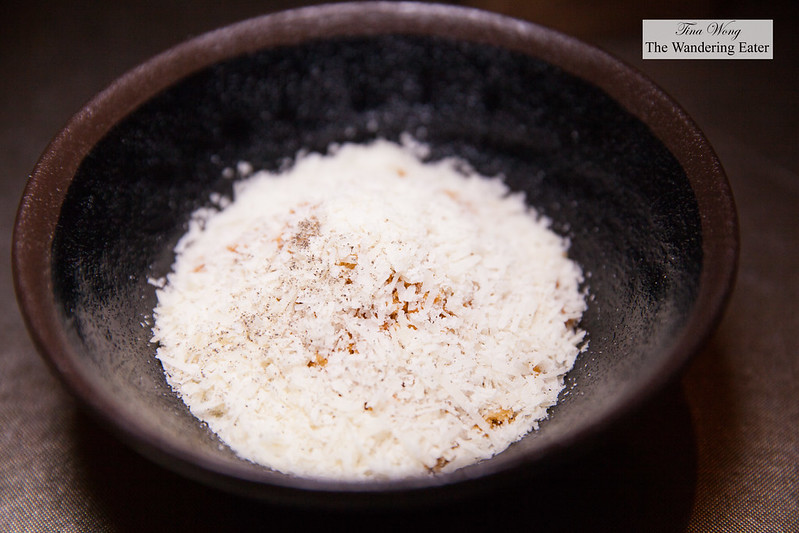 When we were presented with the LT egg with parmesan was an unexpected bowl that looks like a hefty pile of grated parmesan with a layer of toasted panko and soft poached egg. When all of these elements are mixed together, it feels like an eggy, subtly cheese-y porridge that has some subtle crunchy, umami bits in every bite. 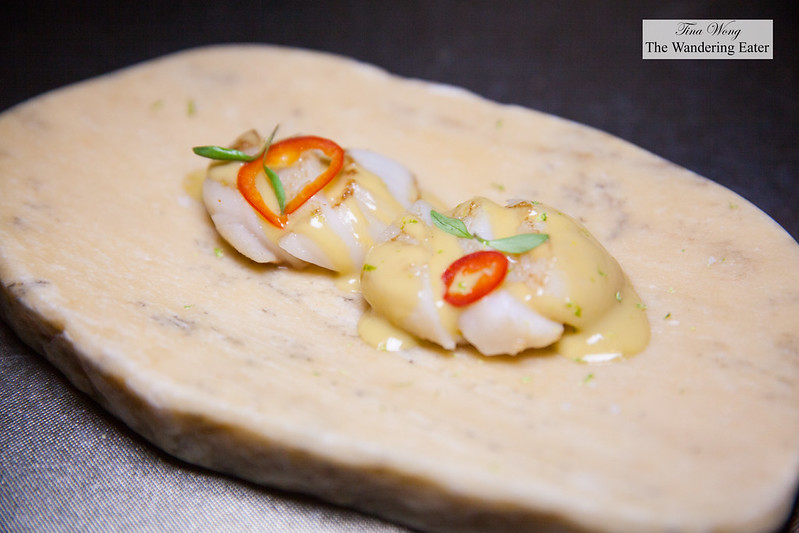 The pan seared scallops with Thai flavors was a unique take on Thai curry. The sauce was delicate on the spice but the scallop’s sweetness and flavors weren’t dominated by the sauce. 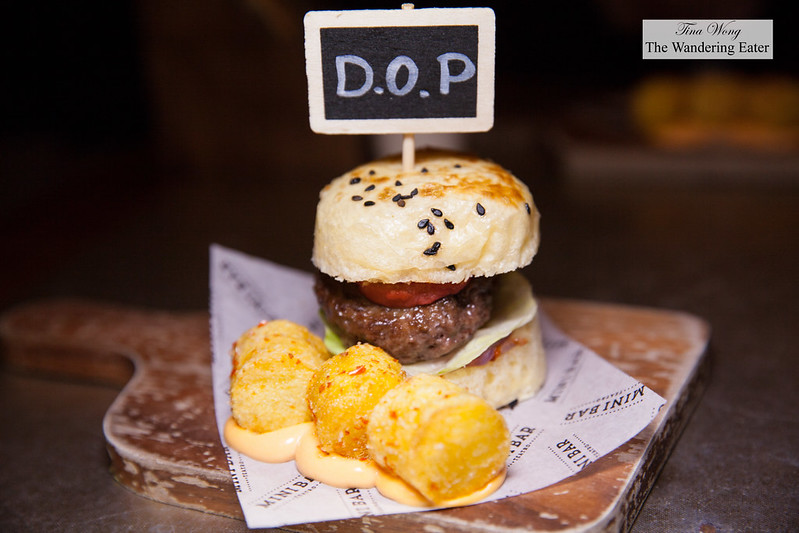 The final savory course is Chef José Avillez’s namesake slider made with PDO beef. The slider is a pretty good take on the American burger. Great beef flavor and juicy with a tomato jam. I really adore their housemade tater tots and the cheese sauce was very tasty. 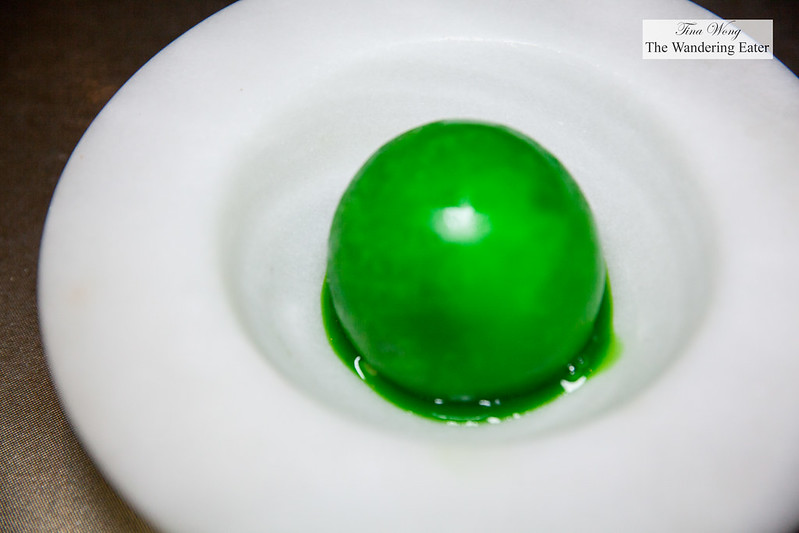 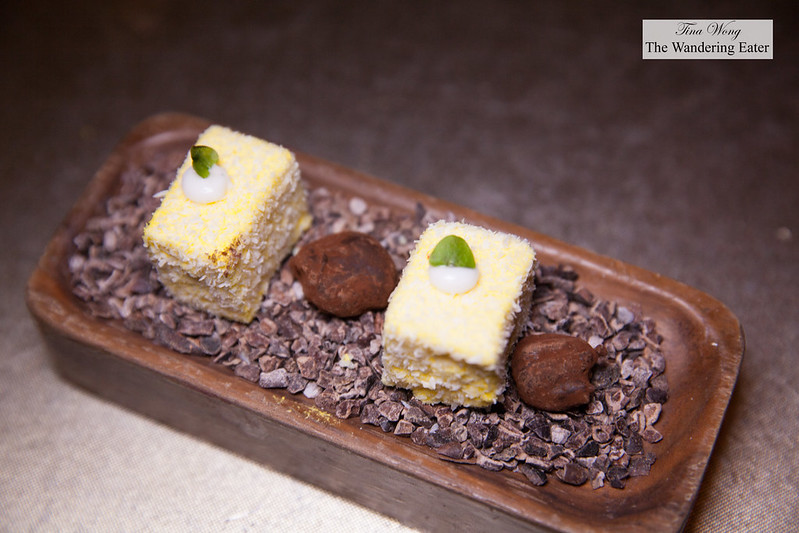 For the sweets, the lemon-lime ice globe filled with yuzu mousse was a smart ending to this meal as it acts as a digestif with the intense acidity of the citruses.The creamy mousse rounds the dessert. The mignardes of fresh passionfruit marshmallow rolled in coconut and chocolate truffle were sublime sweet bites to end the meal.

It was a fun experience to dine at Mini Bar. Though the food is made with precision but it elicits pleasure and content. The service was friendly and professional. Everyone was knowledgeable about the food and cocktails and they were kind of playful presenting each plate giving an element of surprise.