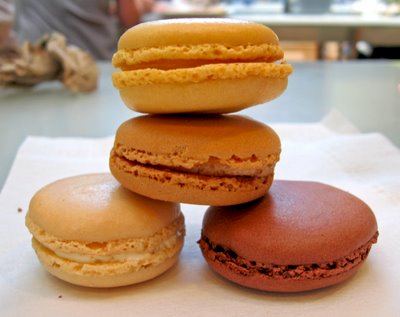 Macarons…I’m talking about the French style macarons, not those coconut mounds that it’s spelled macaroons. Macarons are simple cookies, made from almond powder, sugar and egg whites, then sandwiched with a layer of flavored cream or jam.
To my surprise (well, not really) that there aren’t that many bakeries and shops that sell these yummy pastry delights in Manhattan or Brooklyn. Obviously, in Paris it’s ubiquitous (after drooling after reading Robyn’s multiple blogs about them on her stay in Paris; that’s my original inspiration to this blog. Thank you, Robyn!). I guess the American palate doesn’t like the delicate cookie and tend to like the simple in-your-face flavor and texture of a coconut macaroon that is very common here.

My goal (one of my many food goals actually) for the past two weeks to find the most shops or bakeries that sells French style macarons. Unfortunately, one of the bakeries that did sell macarons during it’s opening months (about half a year ago) no longer sells them. I will talk more about it later on. In conjunction with that, I want to know who’s worth buying them. These little, or big if you prefer, pastries are not cheap. Usually they run on average $2 a pop (for the little guys) in Manhattan. Also, at a certain bakery/shop, one of the macaron flavors stand out as the best ones out of the group. Odd isn’t it?

My criteria of a good macaron should have a light, thin crust that gives way to a soft, chewy cookie that is also light and airy. The filling should have the same flavor as the cookie, should be thick but not pasty, and should offer an obvious contrast to the texture of the cookie.

The rating system will be the same as my croissant rating: 1 (It sucks) to 4 (Divine). 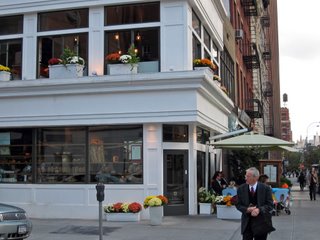 Ok, I’m starting with my small astonishment. Those of you who went to Bouley Bakery & Market in TriBeca a few months ago, knew that they sell macarons. Well, now they don’t! I went there on Tuesday, 10/17 around 1 PM, hoping to get some of their macarons. I’ve tried it once during their opening months and if my memory serves me well, I remembered it was quite good and that they have more exotic flavors like passionfruit. When I asked one of the employees, “Do you still sell macarons?” The employee gave me that expression on his face saying “What the hell is that girl talking about?” He actually replied to me saying, “No, we don’t. Sorry.” Needless to say, that ruined my trip down there. I don’t usually trek down to TriBeca unless I have a craving for some of their other baked goods and pastries, which is quite rare. 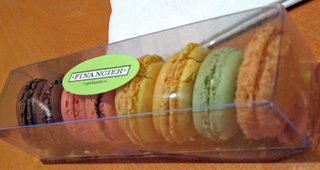 Recovering slowly from my disappointing shock, I proceeded on to Financier Patisserie Wall 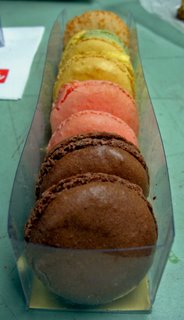 Street, the original branch in 62 Stone Street. I bought a pack of 8 mini-macaron ins for $7. It’s one of the cheapest out the bunch I’ve tried, about 88 cents a piece. Anyways, each macaron actually stood up to my criteria, aforementioned in the beginning. Overall, they’re good. All of the macarons have the crisp, thin outer shell and the moist interior. But each flavor did have it’s own little nuance that I’d took note. 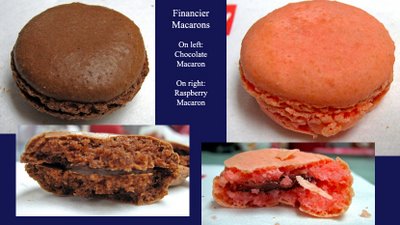 Starting with the chocolate, it has a good dark chocolate ganache, about 60-70% cocoa and it’s not very sweet. It’s very good. Rating: 3 out of 4.

I find the raspberry macaron too sweet, actually it’s sweeter than the chocolate macaron. Probably the raspberry jam filling has too much sugar in the recipe. Rating: 2.5 out of 4. 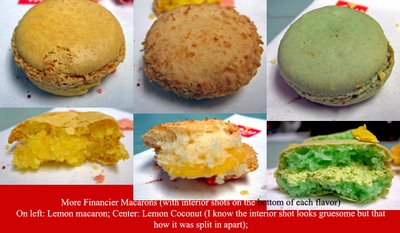 The lemon was very good; it had a good balance of the sweet-sour flavor of the lemon with a nice tang effervescence that lingers on your tongue after eating it. It’s quite memorable. Rating: 3.2 out of 4.

The lemon-coconut was my favorite out of the bunch. It had a nice, nutty flavor and the texture of the coconut flakes made it really interesting. The same lemon filling or curd from the lemon macaron was used here and it worked wonderfully together. The contrast of the earth, nutty flavor of the coconut cookie to the bright, sweet-tart lemon filling. This little macaron spoke volumes to my tongue… Rating: 3.75 out of 4.The pistachio was good, it had a nice pistachio flavor and the cream’s texture was spot on but nothing great about it. Rating: 2.75 out of 4.
Overall rating for the macarons (not averaging the individual scores): 3 out of 4.

Bouchon Bakery, I know those of you who read my blogs, I praise most of their stuff and had my issues with them too. When it comes to the macarons, it’s not bad at all. 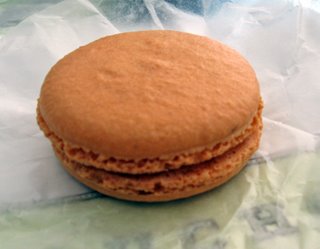 The pumpkin macaron. Yes, I have published a blog about this earlier but it’s part of my purpose here. It’s different than most of the macarons I’ve ever encountered since pumpkin, I usually think, is American than a French flavor, so I tip my hat off to Chef Keller for creating this flavor. If you can recall what I’ve said in the earlier posting, I’ve said this macaron is freaking good! A thin, crisp shell with a moist interior; a great pumpkim flavor that is not overwhelmed by cloves and nutmeg. Just a perfect zen of a macaron, nothing overpowers the other. Rating: 3.5 out of 4.

When I tried their other flavors: coffee, and green apple (they did have chocolate, vanilla, and caramel as the other options but I didn’t have a hankering for them), it’s not as great as the pumpkin. I think it’s just because they’re just regular flavors and the pumpkin epiphany was still fresh on my mind. But they’re all good.

Joyce Bakeshop at 646 Vanderbilt Ave Park (between Park Pl and Prospect Pl) Slope, Brooklyn. It’s a new bakery that had opened for two, nearly three months. It’s charming, the people there are nice especially the fact that it was 8:30 in the morning when I visited there. They have great coffee from Gorilla, which is a local coffee purveyor on 5th Ave. in Brooklyn. Anyways, amongst the many things I’ve bought that day, I had their hazenut and chocolate macarons for 50 cents each. Yes, it’s pretty darn cheap and they’re dainty.

Their hazelut macaron, pictured above and on the right, is quite soft. There’s no thin, crisp shell; it’s just all soft, chewiness throughout the cookie. It tasted a little too sweet for me but it had a nice hazelnut flavor. Rating: 2.5 out of 4. 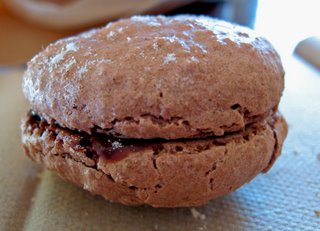 The chocolate macaron had the same texture for as the hazelnut; soft and chewy throughout. It’s 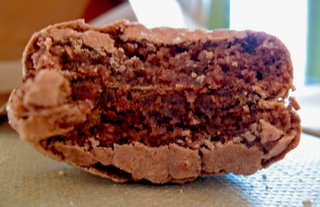 still a little too sweet but it has a nice semi-sweet chocolate filling (50-60% cocoa). 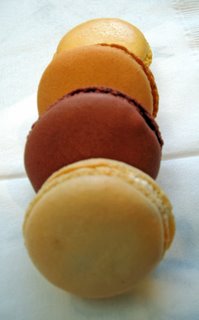 La Maison du Chocolat, I visited the Rockefeller Center location for these macarons. It’s the same macarons in the beginning of this post but arranged differently. These are the small macarons for $2 each. The only available flavors (and what I bought) are vanilla (the foreground), chocolate, caramel, and lemon (the one in the back). 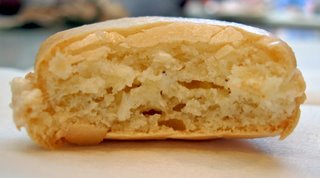 The vanilla macaron is sweet (a little too sweet), chewy, and light. I’m not detecting the crispness of the exterior shell but it has lots of vanilla bean flecks throughout the macaron. Rating: 2.8 out of 4.

The chocolate macaron…I had high expectations for this macaron in particular because this is a high-end chocolate place and I love their chocolate. Unfortunately, I set my self to a little bit of disappointment. The macaron is still soft, not much of a crisp exterior but it’s still delicate, light and moist in the center. The good thing is that their chocolate ganache is excellent; great dark, bittersweet chocolate (about 72-78%). Rating 3.1 out of 4. 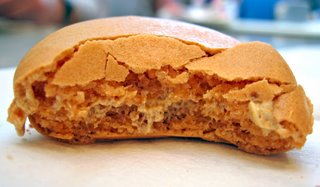 Caramel is a sweet macaron, obviously from the name, but it’s not too sweet. I detected a hint of the burnt, somewhat bitter, sugar flavor as I let the macaron filling linger on my tongue for a few seconds. It gives the macaron an interesting, complex element to the flavor of the macaron. It’s still the same texture as the other macarons: light, soft, no real crisp shell. Rating: 3 out of 4. 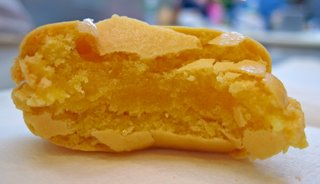 The lemon has the most crisp exterior (finally!) out of the group. It had a nice, sweet tartness from the lemon filling and a moist interior. It’s my favorite from La Maison…a shocker! Rating: 3.5 out of 4.
Overall rating for macarons: 3.2 out of 4. 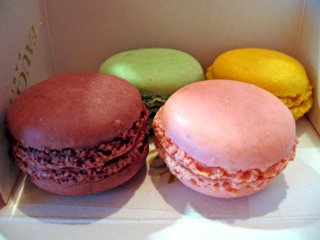 The last place I went to was Fauchon, a Parisian company that sells high end chocolate, pastries, tea, pate de fruit, marzipans that looks like the actual fruit, and lots of other stuff. Anyways, the macarons were limited in flavor options when I visited there yesterday around 9:30 AM. All they had were the chocolate, pistachio, lemon, and raspberry; for both the small and large sizes. I bought the small ones for $2.25 each. 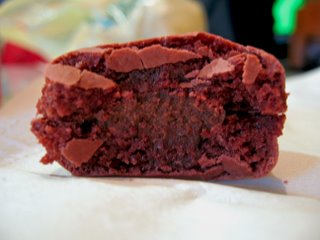 The first one I ate was the chocolate. It had a nice thin, crisp outer shell, moist interior and the chocolate ganache is dark chocolate, about 72% cocoa. Yummy… Rating: 3.2 out of 4. 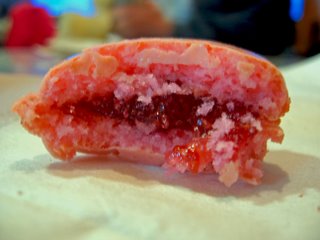 The raspberry had the same textures as the chocolate, the rasberry jam/filling had a good balance of sweet and tart. Rating: 3 out of 4.

The pistachio has the same texture 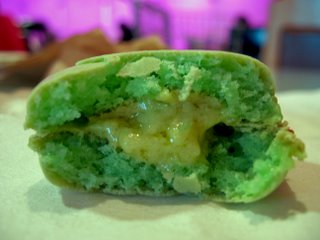 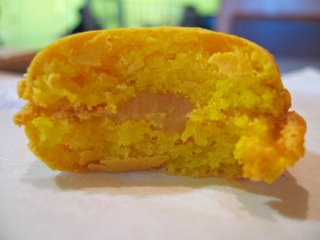 The lemon macaron has the same great characteristics of a good macaron as the others from Fauchon. It has a nice, bright tartness from the lemon filling/curd but nothing extraordinary out of this particular macaron. Rating: 3 out of 4.
Overall rating: 3.2 out of 4.

I know there’s Payard macarons that I should’ve tried and I’m kicking myself for not going there but I didn’t have the time. To tell you honestly, I don’t have a favorite macaron place. None of these places are not mind-blowingly great. I yearn to go to Paris and pig out eating their macarons. But if I have to choose one, it would be a coin toss between Fauchon and La Maison du Chocolat for consistently good macarons. I can’t say much for Payard but I know it should be decent or good from what I’ve read.